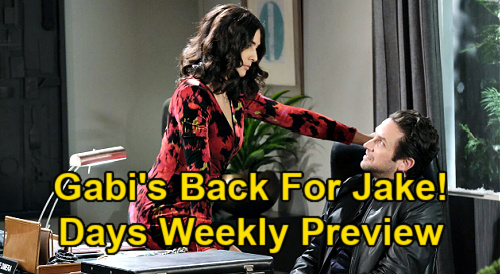 Days of Our Lives (DOOL) spoilers tease that the action is heating up on the NBC soap. The Days of Our Lives preview promo for the week of January 18 is out, and it promises some movement on three exciting storyline fronts. First off, Gabi DiMera (Camila Banus) will be back, and she’ll surprise Jake DiMera (Brandon Barash) in a very big way.

As DOOL viewers will remember, Gabi previously left for Arizona to be with her daughter after Jake rebuffed her in favor of Kate DiMera (Lauren Koslow). Gabi was hurt, and she decided to give up on Jake and let Kate have him.

Well, it seems that Gabi will have changed her mind while she was off in Arizona, and she’ll pop right back up in Salem.

The new promo shows Gabi surprising Jake at the DiMera offices, saying that there’s unfinished business between the two of them as she moves in for a big kiss. Of course, as soon as this happens, Kate walks in and sees Jake and Gabi in their compromising position, so there should be some big fireworks!

Next, the promo deals with the terrible situation that’s unfolding for Allie Horton (Lindsay Arnold). As viewers are aware, Allie now knows that Tripp Dalton (Lucas Adams) has likely been telling the truth the whole time and that he wasn’t the one who assaulted her back in London.

Allie is aware that her attacker could be Charlie Dale (Mike C. Manning), and she’s going to want to take action.

The promo shows Allie getting some advice from Ben Weston (Robert Scott Wilson), who asks Allie if she’s thought about using hypnosis to remember what happened to her.

It appears that Allie will definitely go down that road, as she’s shown sitting with Marlena Evans (Deidre Hall) in Marlena’s office and sobbing, presumably over something she remembers.

The promo also shows Tripp with Charlie, and as viewers will remember, last week ended with the half-brothers coming face to face in Charlie’s apartment. This should be a big confrontation that viewers won’t want to miss!

Finally, the week of January 18 will be big because Gwen Rizczech’s (Emily O’Brien) secret will finally be revealed.

It’s been a big mystery as to what exactly Gwen has against Abigail DiMera (Marci Miller) and her family, and as the weekly preview makes clear, Gwen will finally spill her secret to Jack Deveraux (Matthew Ashford) and Jennifer Deveraux (Cady McClain).

At the same time, Chad DiMera (Billy Flynn) will visit with Wilhelm Rolf (William Utay) in prison, and Days of Our Lives spoilers say that Rolf will tell Chad the whole tale as well. It’s a well-kept secret as to what Gwen is hiding, but the secret is bound to be explosive and change lives in Salem forever.

It looks like we’re in for an exciting week, so stay tuned! We’ll give you updates throughout the weekend as DOOL news comes in. Stick with the NBC soap and don’t forget to check CDL often for the latest Days of Our Lives spoilers, daily episode recaps, and news.