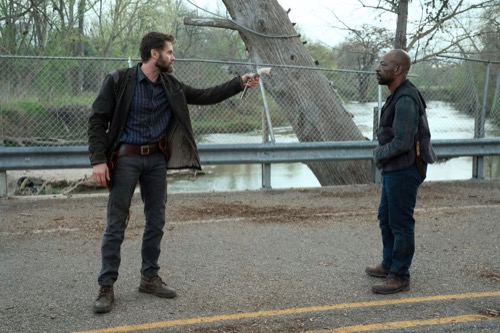 On AMC tonight Fear The Walking Dead (FTWD) airs with an all-new Sunday, April 11, 2021, episode and we have your Fear The Walking Dead Recap below! On tonight’s FTWD season 6 episode 8 Spring Premiere called, “The Door,” as per the AMC synopsis, “A reunion with an old friend helps pull John Dorie out of his darkest moment yet; back at Lawton, Virginia demands answers.”

In tonight’s FTWD episode, the episode begins with John Dorie loading a gun and spelling out “goodbye June” on Scrabble tiles. He is in a cabin where he spent his summers since he was a boy. He points a gun to his chin, but instead, he kills a walker and takes another drink from the bottle of booze on the table. He says, “I’m sorry,” and shoots another walker outside. He hits the table and messes up the message.

John sets out near a roadblock on a bridge that has walkers trapped. Next, he sees a cabin, with a bunch of walkers trying to get in, he stretches and says, “hey” then shoots them all. John carefully approaches the cabin, at the door he says, “I don’t want no trouble, but it is trouble you want, I got some for you.” Nobody answers, John goes in with his gun loaded. He sees blood on the floor, then Dakota comes out, she says she is running from her sister, he says, you could say the same thing about him. She opens a door and sees an injured Morgan on the floor, they haven’t seen each other since Humbug’s Gulch.

Morgan is physically hurting, he says that Dakota saved him. John says he looks like he is seeing a ghost. John hears something, they all get on alert. A man in a cowboy hat walks in and asks if anybody is home. The man helps himself to some candy, brags his walkie-talkie, and says, “you are not going to believe this, John Dorie, I think he has been here.” The guy leaves to get to higher ground because he has bad reception.

John tells them they should get out of there, they will be safer at his cabin. At John’s cabin, he cooks for Morgan and Dakota, he says he learned to cook there as a kid. Morgan says where they are going, there are a river bed and plenty of fish, it would be nice to have him around to cook. John says he has been there a couple of weeks. Morgan is curious to know where June is, John, says it is not worth discussing. Virginia calls Morgan on the walkie-talkie, he answers but John tells him not to because there are rangers nearby.

Morgan asks Gracie if she is ok, she says yes, Virginia has a gun to her head and she tells him that if anything happens to her sister, Gracie, and her baby, and the whole damn coup is going to die. John doesn’t want to fight, he says he is not up to it. Morgan tells him they don’t have a choice, this what they need to do to have life. John says no, but he will help them cross that bridge. John tells Dakota to pack up. They are outside packing up when the man who was in the store with them rides up on a horse and shoots, then he throws a lasso around Morgan’s neck and drags him. John picks up his gun and shoots the man, Morgan is free and so is the horse. John goes over and shoots the guy in the head.

Morgan tells John that they need him, this is reason enough. Morgan and John dig a grave for the ranger they killed. Morgan discovers a truck near the cabin that has been there since John was a child, it just needs a few parts to get it running again. John and Dakota head out to a few doors down where there are other vehicles, they take the parts. John also takes a door from a house, and he tells Morgan it is to keep the past out after he helps him to cross the bridge.

Morgan tells John that he was in a place not that long ago where he is now. Morgan tells him that he is not his dad, he is not going to make the same mistakes and he can go with them. John says they better get to the bridge and they may need the doors. Dakota is driving the truck, John leaves her with a handgun and goes in the back, he has a rifle in hand. Morgan goes to unlock the gate and out come the walkers. Morgan joins John in the back of the truck and Dakota pushes through the barricade, but she looks scared. Morgan and John kill as many as they can and there are a lot of them.

John tries to give Dakota some encouragement and tells her to just pretend it is a Sunday drive. The truck won’t move, John sees a walker stuck underneath and tells her to put it in first. The doors come in handy to block out the walkers, John goes to the front of the truck to see why Dakota suddenly can’t get the truck to run, he sees two wires and connects them, she gets it going and floors it because John is on the hood and a bunch of walkers is coming at him. Morgan kills the last of them, they made it past.

They all take a breath. Morgan tells John he found something when he was working on the truck, though he would want it. It is a photo of John and his father, he puts it in his pocket and tells Morgan he is not going with him. Morgan calls Virginia and tells her that he wants to meet in person, he tells her about John Dorie’s cabin and says he will be waiting there for her. Morgan tells John that he can’t go back now.

John notices that a clip is missing from the truck, he tells Dakota they need to find it before they can head out in the truck. She finds John’s hat and gives it to him, then she thanks him for trusting her with the gun. She tells him that he should go with them, she likes him and he can’t go back to his cabin. He tells her that if he waits for her, he can end this alone. She found the clip but falls down and a walker comes at her. She stabs it with a knife and John notices that it is the knife that killed Cameron. He tells her that she killed Cameron and Virginia was covering for her. Dakota pulls a gun on him, he says he is not going to hurt her, give him a chance to show her, they can get past this. Dakota shoots John, she says she is sorry, she pushes him into the river.

We see John, face down in the river, blood floating around him. He sees the photo of him and his dad, he picks it up and looks at it, presses it to his chest, and swims up. John is alive, he clutches to some debris in the water and says, “not today.” Morgan walks up to Dakota and sees her with the gun, he asks her what she did, she says she didn’t want to do it but she had to. Morgan asks about John, she says he is floating down the river with a bullet in his chest.

Virginia arrives at the cabin and is mad that the place is empty. June is there and she asks where they are. Morgan calls Virginia and tells her that John is hurt, he is going downriver, please help him and then they can talk.

We go to Dwight, Charlie, and Alicia at Morgan’s new place, he tells them that they are going to need all the firepower they can get.

June sees John washed up on the beach, she runs over to him and he has turned. June is forced to finish off John.