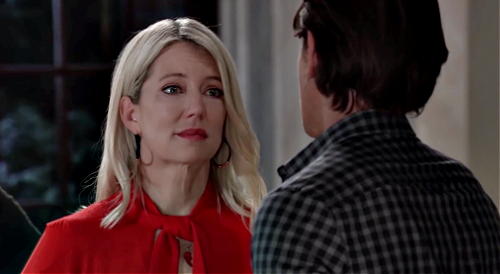 General Hospital (GH) spoilers tease that Nina Reeves (Cynthia Watros) may have a serious break with reality soon. As GH viewers know, Nina had a serious lapse in judgment recently when she tried to explain to Wiley Quartermaine Corinthos (Erik and Theo Olson) how his “real” mommy was Nelle Benson Jerome (Chloe Lanier) and not Willow Tait (Katelyn MacMullen).

Then Wiley said the same to Willow, and Michael Corinthos (Chad Duell) decided that enough was enough. Michael promptly told Nina that they needed to rethink their little experiment with giving Nina access to Wiley.

Michael clearly doesn’t trust Nina to keep her mouth shut when it comes to Wiley’s complicated parentage, and so now Nina’s going to have to take a huge step back and spend virtually no time with Wiley.

It seems that Nina just couldn’t stop herself where Wiley was concerned, and she was determined to bring Nelle into the picture somehow.

Of course, it doesn’t help that Nina has an idealized version of Nelle in her head and that she’s not being realistic about who Nelle was and what she was capable of. It’s no wonder that Michael, Willow, and Carly Corinthos (Laura Wright) were upset.

Of course, Nina should have known better than to risk her access to Wiley by doing something that would confuse him so much. Nina has some impulsivity problems, much like her daughter Nelle, and one wonders what she might do if Michael proves that he’s serious about keeping Nina separated from Wiley.

Might Nina totally lose it and try to kidnap Wiley?

Let’s face it – Nina has been under a great deal of stress lately. It was a major stressful life event for Nina to find out that her daughter was Nelle and that she was dead and gone.

Then, Nina had to come to terms with exactly how Nelle died and the possibility that she could have been saved by Carly. That’s a lot for a person to take right there, but then to be shut out of Wiley’s life too – well, that could push Nina right over the edge.

Perhaps we’ll see Nina snap and abduct Wiley, much like Nelle did at one point. Nina could abscond with Wiley, thinking that it’s the only way for them to be together.

And if Nina does, then it would virtually guarantee that she won’t ever get to be around the little boy again, once Michael and Willow get Wiley back.

We’ll see what happens here, but we doubt that Nina’s just going to accept Michael’s new mandate that she stay away from Wiley. Do you think that Nina will end up kidnapping Wiley out of desperation?

Stay tuned to the ABC soap and keep checking back with us here at CDL for the latest General Hospital spoilers, daily episode recaps, and news.