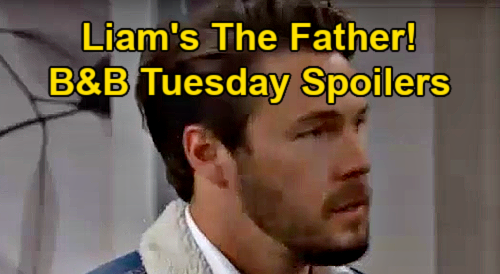 The Bold and the Beautiful spoilers for Tuesday, February 16, tease that Dr. Campbell (Tina Huang) will finally tell Steffy Forrester (Jacqueline MacInnes Wood) the news she’s been anxious to hear.

Well, according to B&B spoilers, Dr. Campbell will tell a shocked room that the DNA test that was run between Steffy’s unborn baby and Finn isn’t a match, which makes Liam the baby’s father.

Let’s just say that everyone will be in shock and utter disbelief, as Steffy and Liam have to come to grips with having another child together.

Of course, Finn and Hope are going to be completely devastated by the news. As B&B viewers know, Finn was eager to be a dad and wanted to share this experience with Steffy.

And Hope had just resigned herself to working toward repairing her marriage to Liam, but that was based on a strong belief that the baby would be Finn’s. Now everyone is going to have to regroup and try to process the news.

It looks like Steffy and Finn will head back to the cliff house straight from the hospital, where they’ll try to come to terms with the devastating news they just learned.

Finn’s going to have a really difficult time handling both the disappointment of not being a father and the fact that Steffy will now have two children with Liam. Look for some tense discussions, as Steffy worries that Finn might bolt.

The Bold and the Beautiful spoilers also indicate that Liam will desperately try to save his marriage to Hope on Tuesday’s episode of the show, indicating that Hope may have a total turnaround and want to end her marriage to Liam.

Hope’s going to have a really hard time on Tuesday’s episode, as she falls apart when she and Liam go back home.

Of course, Liam will probably do his best to assure Hope that no matter what, he wants his life and his future to be with her. But it doesn’t look like Hope will be in any mood to hear what’s in Liam’s heart, as she struggles with the idea of Steffy and Liam being bonded together even more with a second child.

Tuesday’s episode is going to be terrific, so stick with the CBS soap! Remember, we’ll keep you updated on all the latest Bold and the Beautiful spoilers, updates, and news. Check out our daily episode recaps as well!