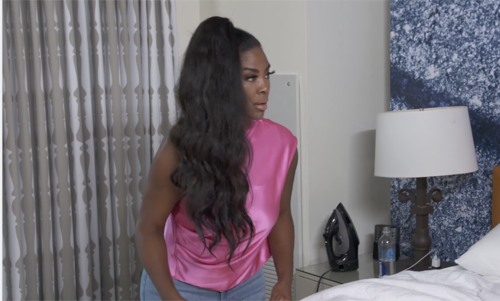 Tonight on Bravo The Real Housewives of Atlanta airs with an all-new Sunday, April 4, 2021, season 13 episode 16 and we have you The Real Housewives of Atlanta recap below. On tonight’s RHOA season 13 episode 16, as per the Bravo synopsis, “The ladies’ trip to New Orleans continues and Marlo gets in the middle of a feud between Porsha and Kenya. Kandi decides at least to escape the impending storm and head home to open Blaze Steakhouse.”

In tonight’s RHOA episode, the ladies are in New Orleans. It is Day 2 of their trip. The ladies meet up with Drew. She has a surprise for them. They show up to meet Big Freedia. They all go crazy. They get to work cooking, drinking, and dancing.

Marlo, Kandi, and Kenya all talk when the ladies are in the other room. They discuss whether or not Porsha slept with Bolo. Kandi could care less. Kenya knows she did. Marlo is confused and cares way too much according to Kandi.

Big Freedia and the ladies sit to eat after saying grace. During dinner, Marlo asks Big Freedia about friendship. She shares her troubled scenario. Porsha gets mad. She knows she is talking about her. They get into a fight. Kandi trues to stop it all. But they continue to fight. Marlo gets up and leaves. LaToya goes with her. Kenya and Porsha continue to sit at the table and fight over who slept with Bolo. Kandi just wants them to find a solution.

Kandi and Marlo talk alone later. Kandi just wants to understand why Marlo has put herself in between the Porsha and Kenya drama. Later, LaToya visits Kenya to tell her Porsha left on a flight to Atlanta and Kandi also left. She had work early on Monday and with a storm rolling in, she needed to leave. Kenya calls Porsha foul. She left Shamea behind.

The storm rolls in. Marlo, Kenya, and Cynthia all hang out. Drew and Shamea hang out in another room. They are all talking about Kandi and Porsha leaving when the power goes out. Cynthia is so sick of the weather. The hurricane is the worst to hit New Orleans so late in the season. The ladies are forced to pack in the dark to head home. Porsha thinks her trip has been way better than Drew’s.

After the ladies return from their trip. Cynthia and Porsha meet at Cynthia’s house for drinks to celebrate Georgia becoming a blue state and Biden’s win. They are excited their state flipped. After, the ladies meet to promote small black-owned businesses on their social media platforms. It takes them a dozen tries to get their video right. They have fun laughing and recording.

Cynthia and Porsha get into the drama that happened in New Orleans. Kandi calls. She is doing a tasting and wants the two of them to come. She shares that it will be a private event.

All of the ladies arrive at a restaurant. Kandi has invited her mom, aunt, and a few other family members. Porsha and Kenya are both there. Marlo arrives. Porsha is annoyed.