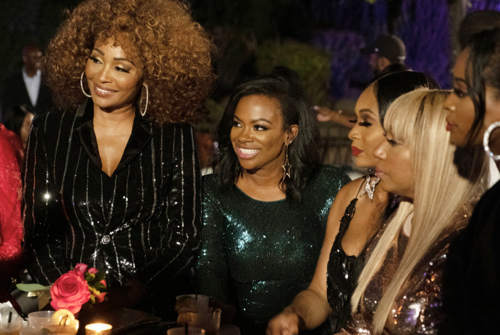 Tonight on Bravo The Real Housewives of Atlanta airs with an all-new Sunday, December 13, 2020, season 13 episode 2 called, “New Peach In The Orchard,” and we have your The Real Housewives of Atlanta recap below. On tonight’s RHOA season 13 episode 2, as per the Bravo synopsis, “Porsha’s release from prison after protesting further ignites her activism.

Actress and songstress Drew Sidora brings her Chi-Town flavor to Atlanta, however, her marriage is anything but picture perfect. Cynthia hosts a wine tasting at Lake Bailey, and an unlikely friendship has many of the women turning their heads. Meanwhile, Kandi has a full-circle moment as she attends Riley’s graduation.”

Kandi’s friend, Latoya visits. Kenya is there and they are talking about their families. Latoya is in the middle of a divorce, Kenya is separated and waiting to make a final decision about divorce. Kenya doesn’t know how Mark will respond if he receives divorce papers. Eva is there as well and they are all enjoying drinks and laughing.

Porsha talks about her time in prison, the floors were hard, she is tired and she just wants to be home. She just wants to be home kiss her momma and her baby. But the reason she is there is for Breonna Taylor and she can’t do either of those things now. When she walked out of prison, she saw Breonna’s mother, Tamika Palmer and she hugged her and she had such warmth, she was so selfless. That is all Porsha needed to see before she went home.

Drew and Cynthia are out for dinner, the two enjoy a glass of wine and talk. Drew is an actress, she has been acting since she was eight years-old. She wants to go for bigger roles. Cynthia says they should do a couples night. Eight hours earlier, Aniya, Dre’s 2 year-old daughter is home with her. Then Her mother, Machai and Ralph bring her in flowers for her and Ralph’s six year anniversary. She met her when she was on her first tour for TLC. Her mother lives with them, and it is always not easy when they want alone time. She has a front row seat to everything they go through and she makes her opinion known.

Riley’s graduation day, Kandi wanted to stop and get flowers but there is no time. Kandi picks up mama Joyce. Kandi says it is not the graduation that she was expecting, only two of them were permitted to be there. Riley has a strong personality that Kandi is so proud of.

Porsha is home after her ordeal, even though she made the decision to go to the protests life still goes on; her schedule just does not stop. She picks her daughter up and snuggles her. She says she is protesting for her daughter’s future.

Cynthia is preparing some food with Chandler, she is hosting the other women. Latoya and Kenya pull up. Cynthia’s fiancé Mike is there, he greets the women. Marlo arrives, Cynthia sits her near Kenya. Meanwhile, Kandi is home and Riley arrives, she gives her flowers and congratulates her. Kandi is thrilled to look at her certificate, so is mama Joyce. Kandi tells her that she is so proud of her. Back to the group of women, Latoya tells them that she had a sugar daddy and he bought her first car, and she was a stripper.

Then, Drew and Ralph arrive. The women go outside, Mike and Ralph go for a walk. Ralph tells Mike that his marriage is a lot of work, but he values happiness. They have a pandemic and three kids home all the time. He was her nurse and he has his mother-in-law living there and they are like two bulls, so he sometimes takes a couple of days off. Mike tells him to tell Drew what he is feeling and he hopes he find his happiness. Meanwhile, the women do a wine tasting together. They start talking about their relationships and the definition of being separated. Latoya and Kenya are the first to leave.

Kandi and Todd are at home, Riley asks where her cake is and Kandi says she ate it. Meanwhile, Lauren tells her sister Porsha that she looks good coming out of quarantine. Drew and Ralph are getting ready to celebrate their anniversary, Drew tells her that he has a surprise; balloons, roses and they are toasting it up together with champagne. First, Drew says a prayer.