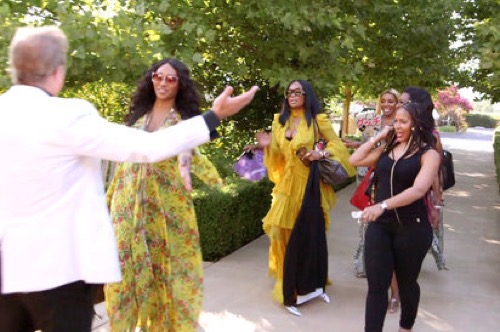 Tonight on Bravo The Real Housewives of Atlanta premieres with an all-new Sunday, December 3, season 10 episode 5 called, “All Aboard the Shady Express,” and we have your The Real Housewives of Atlanta recap below. On tonight’s RHOA season 10 episode 5, as per the Bravo synopsis, “NeNe’s party concludes in an unforgettable way, leaving the girls trying to make sense of what transpired between Kenya and Kim. Cynthia opens up to her daughter about her new man, while Kenya grapples with heartbreaking family news. Shereé invites the girls on a trip, where she reveals a shocking secret about her romantic life.”

This week on Real Housewives of Atlanta the fight continues between Porsha and Nene. Porsha tells Nene “You shouldn’t even be here.” Nene fires back and tells Porsha “If it weren’t for me you wouldn’t be here. You disrespected Kandi and you didn’t have her back!” Nene storms away from the table and everyone except Cynthia leaves with her. Cynthia asks Porsha “Are you ok?” Porsha says “I’m ok. People are just trying to break me down and it’s just not right.”

Meanwhile, Nene and Kandi are in another room talking as well Nene says “She goes around telling people that I want to get her fired. The only thing I said was I wanted freak and fraud fired.” Kenya speaks up and says “Porsha forgets how good she had it with these ladies.” Kandi is taking glee in the fact that someone else has drama with Porsha other than her.

Porsha tells Cynthia “Nene is always saying that people have to own up to the things they do, but when is she going to own to all the wrong that she has done to all of the ladies in this group? She doesn’t, but I have to give blood for my sins. Right now I don’t consider any of them friends,”
The next day Cynthia meets up with Sheree and Marlo and tells that the group is splitting up after last night’s disastrous dinner party. Porsha calls Lauren and tells her about the party. She says “Sheree got up out of her seat and they had to hold her back.” Lauren says “That is no way for an almost 50-year-old woman to act.”

The ladies get together for a sightseeing tour of San Francisco. Kenya has to leave San Francisco early because she is going to bury her grandmother. Porsha gets very emotional and she starts to cry. Cynthia gets up to check up on her. When she comes back Nene makes a snide comment and Cynthia speaks up. She tells Nene “I think you need to come to her and tell her this is what hurt me and really listen to her.” Cynthia also tells Nene “I don’t care what someone says on a show if I know who someone truly is and I see that they are hurting I am going to see them.”

The ladies arrive in China town. While they are walking around Kandi asks Nene “Why were you so surprised about Sheree’s man?” Nene tells her “I met him before she did. He’s a con artist.

Cynthia decides to throw a “wedding” for Kenya to try and lift her spirits. She calls Nene and tells her. Sheree says “Who’s going to play the husband?” Nene says “We can get her a fake husband. She’s used to that.” The ladies arrange a room in the hotel and they all plan a ghetto wedding, but everyone is worried that Kenya won’t be receptive to the idea. Nene says “Do you think she’ll take this well?” Kandi says “She should. She threw that divorce party that didn’t go too well.”

Cynthia calls the ladies and alerts them that she and Kenya are on their way downstairs. Kenya has no idea what’s going on. She really doesn’t want to be around the other women and thinks that she and Cynthia are headed out for a night on the town. When they walk in Kenya is amused and decides to go with the flow. Nene officiates the “wedding”. The ladies all have a good laugh at the wedding. After the ceremony, Porsha pulls Kandi aside and tells her “I know there was a situation where you were hurt and I want to apologize to you.” Kandi tells her “I just want to have a good time and let it go.”

The ladies decide to head out to the vineyards and everyone seems to be much more relaxed. Once they board the train Porsha decides to go to the bathroom and she ends up stuck sitting with Kandi and Kenya, Porsha is not happy about this at all.

Sheree is telling Nene and Cynthia about her man. She tells them “We had a great time when he was out.” Nene pipes up and says “When he was out he was tricking though.” Sheree looks upset and asks her “Tricking what?” Nene responds “Tricking people.” Sheree says “He is in prison for securities fraud.” Nene is not buying it.
Kandi is doing her best to try and make things civil with Porsha while they are on the train ride to Napa, but it is not easy. Porsha is talking to Kenya. She tells her “I apologized to Kandi. Whatever you’re relationship is with Nene is a good thing and whatever your relationship is with Kandi is a good thing.” Cynthia tells Kandi “Porsha understands that you need time because what happened with Phaedra was horrible.”

When the ladies arrive at the vineyard they are all laughing and joking. The man greets them and tells them “If you really want to make wine you have to take off your shoes and smash the grapes.” Nene asks him “Are you going to lick our toes afterward.” He laughs and says “Absolutely!” Everyone except for Nene and Kandi takes their shoes off and climb into the bins to squash the grapes.

Kenya is leaving to go bury her grandmother. The ladies are enjoying their wine. Cynthia reveals Kandi’s news about getting the cover of Essence magazine. Kandi says “We drove by Mark’s restaurant, but we didn’t go in.” Cynthia says “We all know that Kenya gets scrutinized about her relationships.” Everyone is quick to chime in with an opinion. Cynthia says “I am Kenya’s good friend. I don’t have to pressure her to meet her husband right away.” Nene says “Let’s play a game. How many of ya’ll think Kenya is really married?” Cynthia gets upset and gets up. Nene asks “Why are you leaving the room?’ Cynthia says “I don’t want to hear ya’ll talking crap about Kenya.”

After Nene talks to her, Cynthia comes back. Kandi asks her “Why did you leave the room?” Cynthia tells her “I just feel like we should respect Kenya’s choices about her relationship,” Marlo speaks up and says “When you first left the room I was mad, but then I thought maybe you were hurt because you hadn’t been invited to the wedding or been able to meet Mark.” Cynthia confesses that she is a bit hurt that she wasn’t invited to the wedding or hasn’t met Kenya’s husband, but she tells the ladies “We have to respect Kenya’s choices in her relationship.”