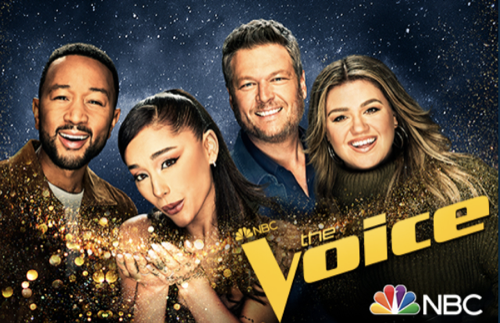 Tonight on NBC’s Emmy Award-winning musical competition The Voice airs with an all-new Tuesday, September 20, 2021, season 21 episode 1 “The Blind Auditions Premiere,” and we have your The Voice recap right below.

On tonight’s The Voice season 21 episode 1 “The Blind Auditions Premiere” as per the NBC synopsis, “The talent is exceptional and the competition fierce as Ariana Grande claims her red chair alongside returning coaches Kelly Clarkson, John Legend, and Blake Shelton as they vie to discover and coach the next singing phenomenon.”

In tonight’s The Voice premiere, the judges come out and hit the stage to sing RESPECT together. Kelly Clarkson and Ariana Grande dominate the performance with Blake and John Legend joining in. Ariana is thrilled to be there and she is looking to win.

The judges get right to it. A country trio kicks off the night. Kelly turns first. All of the judges follow right after. Girl Named Tom’s is the group. Kelly makes her case how she can help them. Blake calls her a spaz on the button. She hits it fast no matter what. He then makes fun of how the ladies would lead them down the wrong path. The group chooses Kelly.

A singer named Katie Rae is next up. She comes to the stage after a long struggle with postpartum depression. She performs When The Bones Are Good as her son and husband watch. The judges love her. Ariana especially loves her vocals and would love to work with her. Kelly loves her range. They all give their pitches. Katie chooses Ariana.

During the break, fans scream to Ariana. Blake tells her to bring it on. Peedy, a 19-year-old from the South, comes on stage to sing an Elvis song. Blake is instantly ready to be his coach. John turns too. After Ariana throws her hat into the ring. Peedy chooses Blake.

The judges all joke that Blake is unbearable now that he won again last season. Blake tells Ariana he will be nice to her backstage but on stage, he wants to win.

Next up is Jonathan, a singer whose mom did vocals for Marvin Gaye and more. She became a vocals coach and helped her son. He had a plan, starting doing gigs, went to Japan, and was diagnosed with cancer. He is now 5 years cancer-free and ready to push ahead with his dreams.

Jonathan takes the stage. He sings and gets the attention of John and Ariana. John thinks he is silky smooth. Jonathan picks John. They both seem excited about their new partnership. John gives him a battle robe. Blake thinks it looks like a shower robe.

Next up, Marco, who is just 15, sings Bailamos. It is his dream to be a cross-over artist. He loves Enrique Iglesias. None of the judges turn. When they do they explain that he is young and needs to come back. He is almost there. Ariana experiences her first at rejecting someone and is sad.

Katherine Anne Moehler takes the stage. Ariana is one of her inspirations. She lives in Memphis where she is a nanny working on her masters. She sings with her family watching. Blake and Ariana turn at the last minute. Katherine tells Ariana she is obsessed with her.

John and Kelly make jokes about how Blake has no chance here. Blake makes it known that Ariana is a talent but how is she as a coach? Katherine picks Ariana. Ariana hugs her and gives her a lunch box.

Jack Rogan, an 18-year-old singer, turns Kelly’s head and John’s. He is from Rochester, New York. Ariana wishes she would have pushed the button. John pushed that button first. He loved Jack’s tone. Blake agrees. Kelly did turn after John. Kelly loves his vibe. Jack picks John. John feels like his team is coming together.

A beautiful country singer performs next. Blake wants to turn but Kelly blocks him. Kelly wants to win Kinsey Rose from Nashville. She has been there for 11 years and performing. Her journey has been a rollercoaster.

John doesn’t care that she sings country. He loves her tone. Kelly used the only block for Kinsey. She also loved blocking Blake. Kinsey is going with Kelly.

Vaughn is up next. He is a registered nurse in Texas. He loves music and has been singing since he was a kid. His culture embraces music. Ariana loves his voice. She heard some breaks in his voice and wants to help him. John also tries to get Vaughn to join his team. Kelly is also in love with him. They all fight to win him over. He chooses Ariana.

Gracie takes the stage next but doesn’t get picked up by any of the judges. She has some work to do. But she has a promise. She is a huge Ariana fan, showing Ariana pictures of them meeting before at a concert. Ariana keeps one

Wendy Hoten once had a successful career. She plans to return to the top. Blake turns and then blocks John. Kelly turns next. Ariana is also into Weny’s vocals. They all stand and clap. Wendy introduces herself. John just wants Wendy to know he was very interesting but was blocked.

Ariana is so impressed. Blake begs. Kelly brings up her show and she has a jacket. They all laugh. Wendy chooses Blake. He is beyond happy and cannot wait to see where this goes. Ariana is scheming now. She cannot let him win. Blake dances on stage.