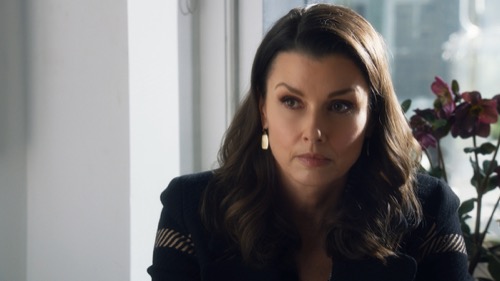 Tonight on CBS their hit drama starring Tom Selleck Blue Bloods airs an all-new Friday, April 29, 2022, episode and we have your Blue Bloods recap below. On tonight’s Blue Bloods Season 12 Episode 19 “Tangled Up in Blue”,” as per the CBS synopsis, “When Erin is stalked by a man who was recently released from prison after serving 12 years, she enlists Anthony and Danny to investigate her office’s role in his sentencing.

Also, Jamie works to save his badge when he is caught driving under the influence after he is unknowingly given drugs at a party, and Frank navigates multiple family issues as he deals with a troubling medical diagnosis for Henry.”

In tonight’s Blue Bloods episode, Jamie got slipped something. He went out with some friends. They were having fun and he left them alone with his drink, but he never thought they would drug him and so his later being drugged was a surprise. He had to pull over because he couldn’t see straight. He was waiting in his car while he called his friend. He tried to figure out what he had been given and that’s when he witnessed a car accident. Some car ran another car off the road. Jamie didn’t hesitate to run to the car that caught fire. He dragged the person out and he called 911. The cops later showed up. They noticed the state that Jamie was in and so they asked him if he caused this accident.

Jamie said he hadn’t. He then admitted that he had been in his car and that he had taken something, but that he didn’t know what it was when he either ate or drank it. Jamie also identified as Sergeant Reagan. The beat cop had to call in his supervisor and now that it’s going up the flag pole because Jamie was technically driving while impaired. Jamie was going to face disciplinary action for this. His father couldn’t cover for him because the moment he does it will be used against both of them. Frank was later told about what happened. He wanted to let this play out naturally and so he told his people not to intervene.

His team couldn’t bury the story in the press. They couldn’t contact anyone from the IAB department. They also couldn’t try to lessen the possible charges that Jamie might face. Jamie was driving while impaired. No one was going to buy his story of how he was drugged at a friend’s party. His friend won’t even say it happened at the party because then he would be accountable and he was afraid he would be fired from his very conservative law firm. If Jamie wanted to figure out what happened to him, he would have to pursue it himself. He wasn’t going to get any help. Or at least he wasn’t until the person he helped in the car accident had accused him of causing the accident.

They were even trying to sue Jamie for something he didn’t take part in. It had gotten out into the media that Jamie had been driving while impaired and so this guy suing him was trying to make a quick buck. Frank was so angry that he asked his people to step in. He wanted them to get to the bottom of what really happened. They readily agreed to help and they weren’t the only ones looking out for Jamie. The rest of the family also wanted to help. Only they went to Jamie first. They told Jamie that they stood by him and they wanted to help and he told them that it would be better if they didn’t get involved.

Jamie was hitting dead ends during his investigation to find out who drugged him. He didn’t want to entangle anyone else and so he asked them to stay out of it. He told Erin, Danny, and Henry that he wanted to do this on his own. They hadn’t liked it. Except they agreed to go along with it. Eddie and Frank chose to work on Jamie’s behalf in spite of what Jamie though. Frank had his people looking into it. Eddie on other hand spoke to the arresting officer and she picked his brains over what they found as well as what they were able to determine. The driver that crashed was driving over the speed limit when he did so.

There was no alcohol or drugs found in his system. But he was speeding. Jamie, unfortunately, couldn’t remember it too well because otherwise he would have remembered that the car had been practically run off the road by another speeding car. Jamie was still trying to remember everything that happened that night as Erin started getting stalked. She was stalked by Lenny Katz. Katz was someone her department sent to prison years ago. The lead ADA on the case was former ADA Bernie Liggett. Lenny was accusing Liggett was imprisoning him with an unfair advantage. He wasn’t claiming he was innocent. He just says he was treated unfairly.

Lenny wasn’t built for prison. He eventually had to start stabbing people in there to survive and he went on to stab the great-nephew of a guy in the mafia. The mafia wanted him dead. Lenny started following Erin to get her to look into his case and she did. She didn’t find anything she disagreed with. She told Lenny to stop following her on multiple days in several instances. He just kept doing so and so they informed him that he had to get out of town or risk being killed. And that’s what finally got him to stop stalking Erin. Erin’s situation resolved itself around the same time that Jamie’s situation did.

Frank’s people had found a go pro camera of the driver that crashed. The camera proved that Jamie was parked with his brake lights on when he crashed and that he wasn’t driving or involved in the accident. Frank also sent a tip about a phone call that could clear Jamie’s name. The voicemail message proved that Jamie had been drugged and he didn’t know why. After both the voicemail and the footage came out, Jamie was cleared of any wrongdoing. And that didn’t stop his family from mercilessly making fun of his drug episode.

They all got a laugh out of it at Sunday dinner.