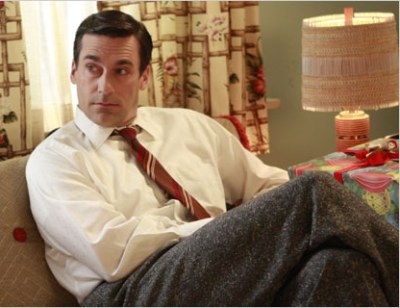 If you haven’t had the opportunity to watch last night’s season finale of Mad Men, then you may want to stop reading this now. This post contains major spoilers for the show, Tomorrowland.

When we left off last week, Lucky Strike had given Sterling Cooper Draper Pryce the boot and Don took out a full page ad in the New York Times talking about how his company planned on turning away any future cigarette companies. Clients were dropping like flies, fearing that the company wouldn’t be around in six months.

Don was seemingly more interested in Dr. Faye Miller, but that all changed…..in a moment’s notice. Betty fired the kids’ nanny, leaving Don high and dry for his trip to California. So he asks his secretary Megan to take up the slack for double the pay. Of course, she is happy to help, offering that she has a friend to visit there.

During their stay in California, Don goes to a meeting and comes back to Megan singing a French lullaby with the kids. He’s smitten. The next night, Megan introduces her friend and heads out to the Whisky A Go Go. She comes back and shortly thereafter, Don is knocking on her door. She invites him out to the balcony and they have sex. Suddenly, their relationship progresses at lightning speed and he’s proposing to her with Anna’s ring! WTF?

A problem is still lurking in the breakup phone call with Dr. Miller that Don is dreading. He makes the call, she tells him off and that’s one less problem for him to deal with.

Peggy is ticked off that she saved the company after signing a deal to represent Topaz pantyhose and everyone is more concerned with Don’s engagement. Then, we find Joan talking to her husband about “their baby”, which leads me to believe that it’s actually Roger’s and she refused to go through with the “procedure”.

In the end, it seemed that Betty was a little miffed to hear the news of Don’s engagement to Megan. Weird, right?

What did you think of last night’s show?