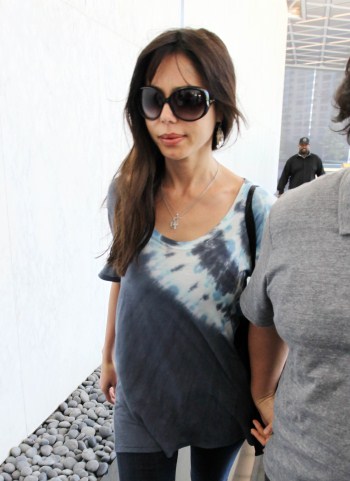 Just when we thought “Mel Hell” had calmed down a bit Golddigger of the year Oksana Grigorieva is reportedly demanding $40,000 a month from Mel Gibson in child support.   Oksana – who has accused her ex-lover of domestic abuse – is said to have asked a judge to increase the monthly payment from $5,000 to $40,000 to help look after their 10-month-old Lucia.   Seems Oksana wants to keep Lucia in gold-plated diapers ;-)

As well as paying for Lucia, Mel also pays for the luxury Los Angeles home where Oksana lives with her daughter and her 13-year-old son Alexander and sources close to the actor are furious she is demanding more.     A source tells TMZ :

“Lifestyle is not an issue for a baby. Think she knows the difference between a Ford and a Bentley?”

It is also reported Oksana receives $2,500-a-month in child support from Alexander’s father, former James Bond actor Timothy Dalton.   It is thought Judge Scott Gordon is yet to rule on Oksana’s petition.   Last month, it was claimed Mel wanted to pay just $6,000 a month in child support.

Lawyers for Mel were said to have told a judge overseeing his bitter custody battle with Oksana that the 54-year-old star spends a staggering $7.2 million a year on himself but he does not want to increase payments for his daughter.   According to reports, Mel’s lawyers insist some of Oksana’s requests – such as he pays for bodyguards – are unnecessary as Lucia is still just a baby.

In contrast, they argue the money he spends on himself is necessary for his living expenses and doesn’t include luxuries such as his private jet.   Mel and Oksana have been locked in a bitter dispute since separating in April.   Since their split, audio tapes have been leaked which apparently feature Mel verbally abusing and threatening Oksana.