Oksana Says ‘Baby Sister’ Natalie Not The Tape Leak – Maybe Mel Did It? 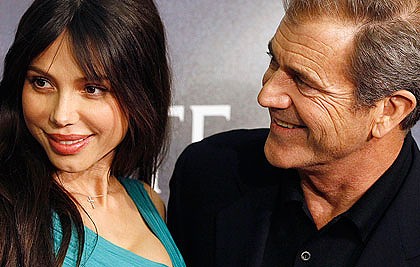 Oksana Grigorieva made 10 known recordings of her darling Mel Gibson without his knowledge – and put them away for a rainy day.   She figured that being the mother of a child of his might not prove to be adequate grounds for her eventual assault on his vault of immense riches. Her true love for the cranky racist, often prone to verbal outbursts and temper tantrums, drunken or otherwise, was never in doubt according to her.    Oksana simply assumed that the women of great celebrities like to keep ingredients for potential blackmail dishes simmering on the back burner until they are served, piping hot, but still rather inedible, or at least prone to casing severe heartburn. One thing that has always disturbed me in Oksana’s stories surrounding her and Mel is that if she felt that she was in true danger of being killed, as she claims, and that that was her motivation in secretly taping Mel, then what good would these silly tapes do her postmortem?

On to the story at hand – In the case of the 10 tapes that have mysteriously been leaked Oksana’s sister Natalie has often been considered a likely candidate.  But now Oksana claims that although she gave Natalie the tapes on February 19 right after one of Mel’s rages, she did not include the special tape that had the “You look like a f**king pig in heat and if you get raped by a pack of ni**ers it will be your fault.”   Well since Oksana is such a reliable source (NOT!) why would we doubt her word on this?   In fact if are to take her seriously then we should assume that somehow Mel got hold of the tapes and released them himself since she claims they never were released through her nor any agency acting on her part.

Article first published as Oksana Says “Baby Sister” Natalie Not The Tape Leak – Maybe Mel Did It? on Technorati.