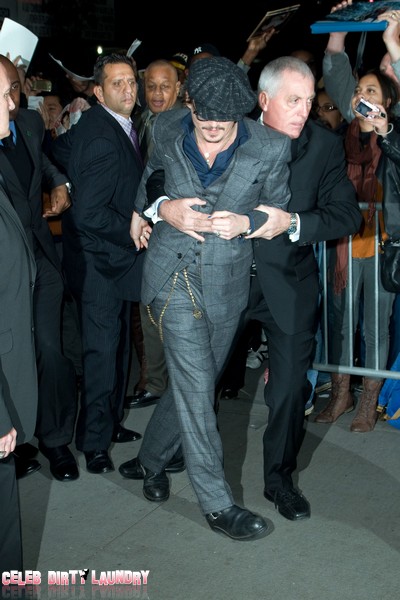 The UK’s Daily Mail reports that Depp was in fine method acting form swaying down the red carpet and stumbling into the barriers either side as adoring fans reveled in an opportunity to catch a glimpse of the celebrated star.

His security however weren’t quite in the same spirits and stepped in quickly to keep Depp on his feet, simultaneously keeping the crowd away in the process. Wearing a grey suit with a gold chain, the actor was quickly frogmarched by his stern-faced team, disappointing fans who were hoping to see him a little longer.

Depp’s display was quite fitting given that ‘The Rum Diary’ sees him play the alter ego of his good friend and pioneer of gonzo journalism, the late Hunter S Thompson. In the film, Depp – playing the character Paul Kemp – travels to the Caribbean to write for a local newspaper which leads to a life of booze and debauchery. The film is based on the book of the same name by Thompson, published in 1998 though actually written back in the 1960s.