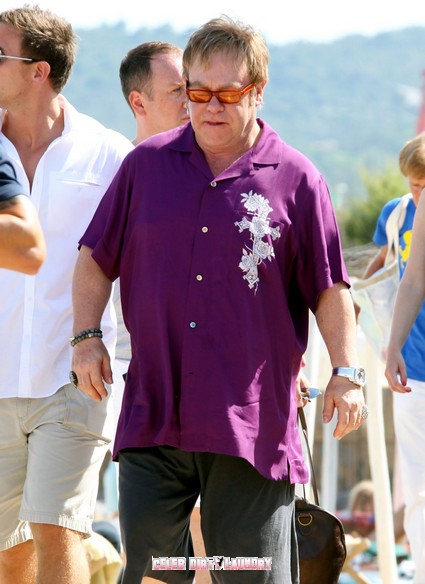 Sir Elton John kicked off his three year residency in Las Vegas last night accompanied by his $1,000,000 piano.   Elton was on stage at Caesar’s Palace for the first in his series of ‘The Million Dollar Piano’ shows.

Elton John was born Reginald Kenneth Dwight on March 25, 1947 and during his four-decade career has sold more than 250 million records.

His single ‘Candle in the Wind 1997’ sold over 33 million copies worldwide making it the best selling single in Billboard’s history. With more than 50 top 40 hits, 6 Grammies, an Oscar, a Tony, and a Golden Glove Award Sir Elton is a tough act to follow.

He told the crowd he named the concerts after his new piano, which it took manufacturer Yamaha four years to build, at a cost of $1 million.

Elton joked: “It has a spin cycle washer, a microwave and an aquarium.”

He then added the only thing missing was “a barbecue.”

Speaking about what the audience could expect ahead of the show, he said: “It’s going to surprise a lot of people.

“This isn’t like the old days. It’s going to be certainly different from anything you’ve seen from me before, as was my last show, ‘The Red Piano.'”

The show featured hits from across Elton’s 40 year career, with video screens on either side displaying shots of memorabilia sent in by fans from his previous shows in the city.

Elton’s last Las Vegas residency spanned five years ending in 2009. The first 16 dates of his current run will be staged throughout October, with the rest yet to be announced.