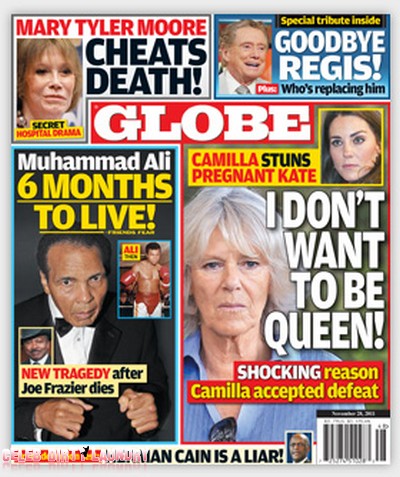 The new issue of Globe Magazine features the cover story Camila “I Don’t Want To Be Queen.’  The magazine claims that Camilla Parker Bowles stunned pregnant Kate Middleton and told her she does not want to be Queen.  Globe has been claiming for a couple of week’s that Kate and Camilla were at war and they have all the details why Camilla has thrown in the white flag and accpted defeat.

Globe has more: I don’t want to be queen.” Only the new GLOBE has details about Camilla’s stunning announcement and why she’s suddenly given up on wearing the crown.

Globe has been claiming for a couple of weeks now that Prince William’s wife Kate is pregnant but no confirmation has come from the palace.   Seems like wishful thinking on the part of the magazine.  As to Camilla not wanting to be Queen, I don’t think the option is currently open to her.    Also featured in this issue the magazine claims that Muhammad Ali who has Parkinson’s disease only has six month left to live.  The claim to have all the details  about the former champ’s losing fight against the disease.

If you want to find out more, pick up the current issue of Globe Magazine.