Nadya Suleman Became ‘Octomom’ Under The Influence Of Drugs 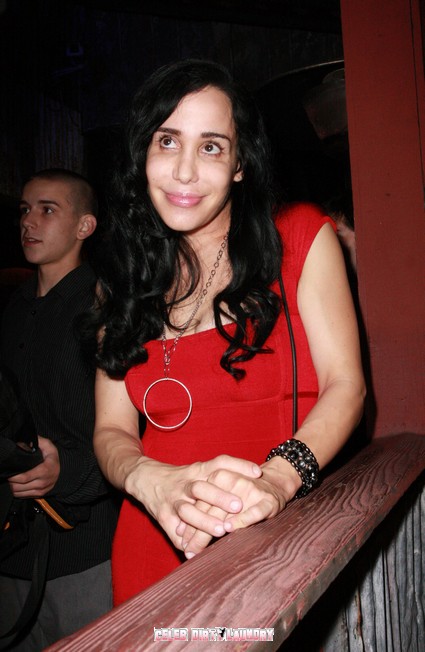 Nadya Suleman has blamed the creation of the “Octomom character” that she has become in part on a California fertility specialist who, she said, had her sign a consent form while she was drugged.

Nadya said she did not mean to have eight children in January 2009, in addition to the six she already had. But while she admitted she did want more children, she insisted she was in no condition to understand a form Dr. Michael Kamrava put in front of her before implanting 12 embryos.

“He wrote something, he gave it to me to sign,” Suleman told HLN’s Dr. Drew Pinsky on Thursday night. She said she was then on “a cocktail of drugs,” including Valium, at the Beverly Hills doctor’s office because her uterus was contracting.  “I signed it, and I didn’t read it.”

Kamrava lost his California medical license July 1 after state officials ruled that he committed “gross negligence” with “repeated negligent acts, for an excessive number of embryo transfers” into Suleman in 2008, the state’s medical board wrote. The same report determined that the doctor felt the implantation was driven “by the patient’s wishes.”

Report: Octomom makes controversial remarks about her own children

During a hearing for the doctor last October, it was revealed Suleman still has 29 frozen embryos in storage. Contrary to some reports, though, Nadya insisted Thursday that she doesn’t want any more children.  Nadya, who claims she had all 14 children by in-vitro fertilization, admitted that she chose to have children in part to address her emotional baggage.

“Is it fair to have a bunch of kids help solve your emotional issues? Of course not,” she said.  “With children, I feel so safe in my predictable world. They will never leave me. Kids love you, unconditionally.”

Suleman admits that she has a host of problems, including anxiety, panic attacks, hyperactivity and obsessive compulsive disorder. “My brain and body are racing constantly,” she added, noting she exercises extensively and only gets two hours of sleep a night.

But expressing regret for contributing to “this mess (that) has deleteriously affected my kids,” Suleman said that she’s now speaking out in part to refute having been made into what she called a “parody without permission.”

“I have the spotlight, I know it’s my responsibility (for my kids) to brush it away and get rid of the Octomom character,” she said.

With no steady income and expenses of over $18,000 a month, Suleman has struggled to get by raising her children. She has previously hosted a yard sale at her La Habra, California, home to deal with the hardship, and had reportedly signed on to be on the HDNet reality TV show “Celebridate.”

And now, Suleman said she is grateful for money she gets from media interviews, especially with overseas outlets.

She also claims to have received “hundreds of death threats,” some targeting her children, as well as a few female stalkers.

“I am hated in my hometown,” she said.

Still, Suleman said that despite the difficulties she feels things are improving. “I feel safest at home with my kids,” she said. “And I want to be only there, that’s my favorite time at night, in my pajamas playing Twister.”