Robert Pattinson Stays in Toronto, While Kristen Stewart Touches Down in London 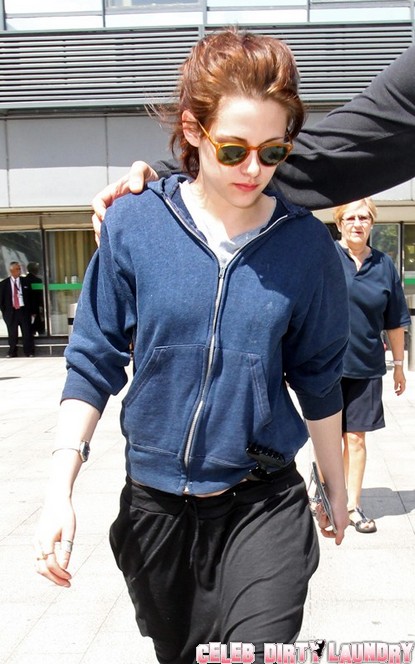 Unfortunately all good things must come to an end – even if you’re lovebirds, Kristen Stewart and Robert Pattinson.   As reported earlier this month, the Twilight stars were cozily cohabitating in Toronto and were spotted on several occasions out and about with their new adopted dog, Bear.  Cute right?

Well, the two still have to bring home a paycheck, so with Rob continuing to film Cosmopolis in Toronto, Kristen flew to London on Tuesday to begin pre-production work on Snow White and the Huntsman, with Sam Claflin and Charlize Theron.  Kristen is set to stay there all summer, so what’s next for my favorite couple?  Are they doomed for good?

The MTV Movie Awards are in Los Angeles on June 5, and sources say the two are set to attend.  Can we say ‘Best Kiss Award’? Let’s hope so…

Well you know I’m hoping the two make it work – we don’t want to see me fall into a state of devastation and shock.  I can hold out until June, and long distance relationships can work sometimes can’t they?  Who am I kidding, my fingers are crossed – no wait, they’re glued!!!

On a side note, Rob was asked recently in an interview with Glamour Italy how he pictures himself at age 90.  Here’s what he had to say:

“I want to be with my wife, sitting on a deckchair, sipping some tea, and reading books in a retirement home, in a beautiful and warm place.”

Seriously if he’s not picturing me in a deckchair beside him, then it sure better be Kristen!!!