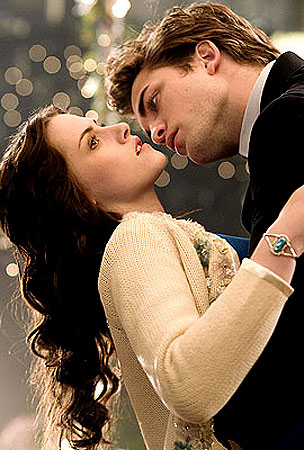 R-Pattz told the Chicago Sun Times “It was insane intense, It was a pretty traumatic scene for me to do as an actor and, frankly, horrible for me emotionally.”  Talk about method acting.  She isn’t really becoming a vampire Rob.  And you’re not really Edward Cullen.   Try to remember that if you ever feel the urge to take down a wolf.  You will not likely be victorious in that fight.

Robert added “Edward has tried for so long not to turn Bella into a vampire and now … well, it’s very sad.  He feels like he has let her down.”  But now they can be the perfect vampire family for ever and ever!

Somehow we doubt that Robert will need psychotherapy as a consequence of being responsible for Kisten/Bella’s change.