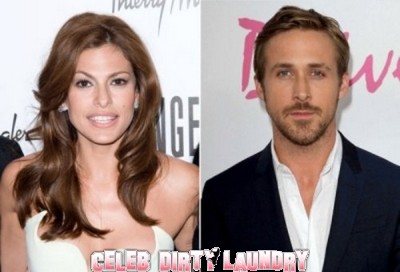 It seems to be more and more obvious that my boyfriend; ahem – Ryan Gosling – is dating his co-star Eva Mendes.  Or do they just have really, really great chemistry.  The two are filming The Place Beyond The Pines, and have been spotted out and about during filming looking more than just buds – as they claim to be.

Now hear me out, I know I tend to write a lot about who’s dating who, sometimes it’s totally a rumour – sometimes not.  But these two together – can we talk about two more beautiful people who would make an awesome duo?  Despite the fact he will eventually come a running to me – I’ll wait; in the meantime he can frolic with Eva.

Ryan, 30, and Eva, 37 were most recently spotted cruising around L.A on Sunday, running errands and grabbing some java. Let me pose this question – would you really want to spend your off time from filming with your co-star when you’re with them every other second of the day unless you don’t have some sort of hanky panky going on?  Ya thought so too.

Story to be continued…