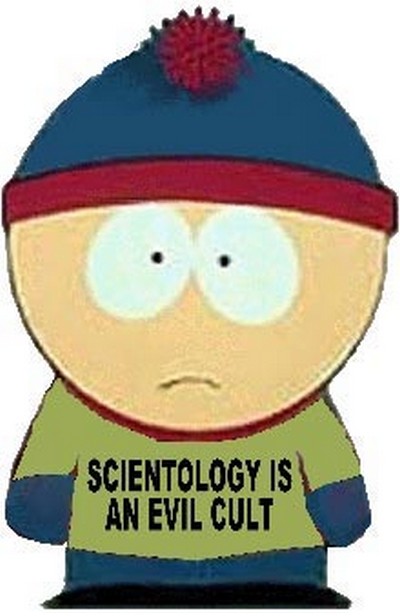 The Village Voice and Marty Rathbun’s blog have an internal Scientologoy document showing that the cult retaliated against South Park’s anti-scientology bent by targeting the show’s creators Trey Parker and Matt Stone.

Scientology apparently investigated Parker and Stone with the goal over a significant period of time with the goal of damaging or destroying the pair. This was in retaliation for the duo deeply embarrassing the cult with South Park’s 2005 episode, ‘Trapped In The Closet’ – an episode that exposed and ridiculed the religion’s bizarre upper-level teachings

Rathbun himself was once a powerful executive in Scientology who defected in 2004, and since 2009 has been criticizing cult leader David Miscavige and the entire Scientology creed.

The document he revealed today suggests that Scientology had identified Parker and Stone’s close friends, and was examining public records on those people, looking for a vulnerability.

“To find a direct line into Stone and Parker some of their friends have been identified,” reads the document, which reads like a typical OSA report on an ongoing investigation. The cult’s information allegedly was coming from Eric Sherman, a film consultant who Rathbun identifies as a Scientologist (the Voice is attempting to reach him), and who had talked with Troma Studio’s Lloyd Kaufman for information about Parker and Stone.

“These connections are being PRC’d,” reads the document, and Rathbun explains that the acronym stands for “public records check.” Scientology’s standard procedure would be to put its private eyes on a complete check of these people and their property, legal, and other public records. If they owed taxes, or had been in messy divorces, or had been arrested, Scientology would soon know about it.

“There are some strings that will be pulled on the PRC on Stone,” the document reads, suggesting that investigators had already found something about Matt Stone in public records that would make him vulnerable.

“Otherwise the special collections will be debugged in order to get some viable strings that can be pulled,” the document then reads, and Rathbun explains that “special collections” is Scientology’s code for trash digging.

Bottom line for me is that stars like John Travolta and Tom Cruise are in deep with this spooky cult – and the rest of us non-aligned innocents better beware.