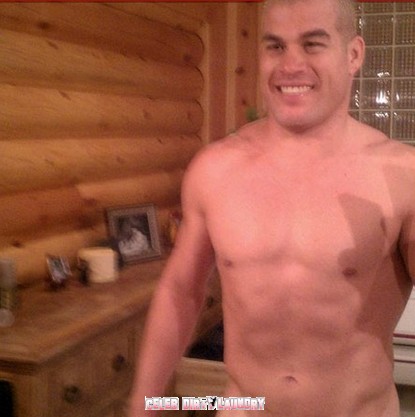 Former UFC Light Heavyweight Champion and MMA fighter Tito Ortiz, 36, had his personal photo-sharing website on twitter hacked today.   The hacker was kind enough to post a nude photo of Tito to his twitter account.  The photo appears to be a naked self-portrait shot with a cell phone.  We have the photo above for you minus of course his ‘crown jewels’ of course.

Hackers have been busy bees this week first a few nude photos of Blake Lively were released and then when her rep said, no, no not Blake the hacker responded by releasing more photos.  Blake continues to deny the photos are authentic.

TMZ has more on the Tito photo leaked, “The photo surfaced just a few hours ago — when it was uploaded to Tito’s personal photo-sharing website … which is connected through his Twitter page.

The photo (seen above) appears to be a naked self-portrait shot with a cell phone. And let’s just say … there’s a reason he had to shoot from such a wide angle.   Moments ago, Tito tweeted, “Someone hack my f**king phone.”

Sure maybe he was hacked but why, oh why do these celebs take naked pictures of themselves and  then they act surprised when they get released?   Are they so narcissistic that they cannot resist taking pictures of themselves?  Don’t they learn naked pics always end up on the internet, especially ones that are on a cell phone.  No claims yet from Tito that the photos are fake!