BY Roberta Ferguson on September 30, 2011 | Comments: one comment
Related : Dancing With The Stars Season 13, Elisabetta Canalis 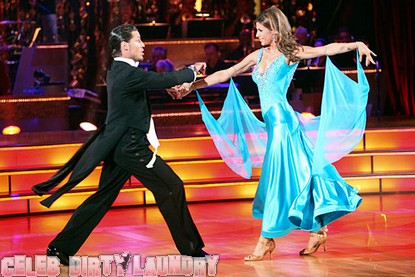 Elisabetta Canalis’ Dancing With The Stars professional dancing partner, Val Chmerkovskiy, is convinced that she didn’t stand a chance in the competition for the Mirror Ball trophy.

Val said it wasn’t a lack of dancing skills on her part as the reason she got booted from the show, but however a lack of popularity.

He said, “She’s not known in this country aside from her past relationships. Because of the lack of fan base our only shot was to score high, which we did, but unfortunately for us, that night a lot of couples received similar scores and it was left to the voters to decide.”

He went on to say, “I can’t say what the public perception of Elisabetta was, but I do know that going up against David Arquette’s fanbase or Chaz Bono’s publicity frenzy, she didn’t stand a chance. She’s a beautiful Italian woman whose ‘language of thought’ isn’t English. Sarcasm and sense of humor got lost in translation many, many times during rehearsals and interviews. She’s a pleasant person to be around though, she has a big heart.”

He added that Elisabetta didn’t realize what kind of work she was in for during the competition. He said, “I felt like Elisabetta was not prepared for the amount of work that should be required of her. By the time she realized what it took to be successful, it was already too late.”

Do you think Elisabetta should’ve been eliminated? Who should’ve gotten the boot if not her? Sound off in the comments below and let us know your thoughts!