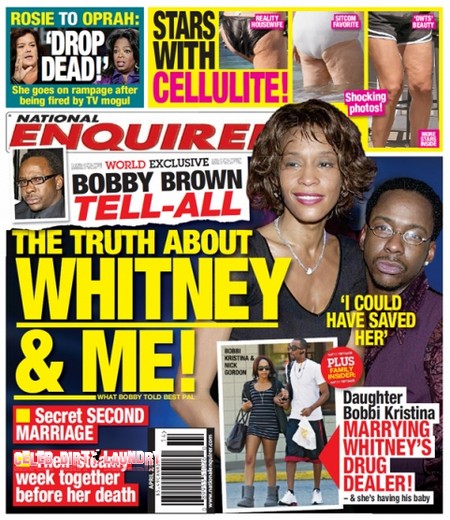 The April 2 issue of National Enquirer features the cover stories of Bobby Brown coming clean about Whitney Houston and Bobbi Kristina getting pregnant by her step brother, Nick Gordon.   Bobby Brown was with Whitney during her most intensive periods of drug abuse – since he was using right along with her – and he knows where all the skeletons are hidden.  Ironically Bobby did not introduce Whitney to HARD DRUGS – as she was already using before she met her future husband.

Bobby is terrified that daughter Bobbi Kristina will discover the terrifying hard core drug tapes he made with her mom while married to Whitney.  Rather than deal with his daughter’s inevitable reaction to seeing the tapes he is trying to take a proactive approach.

But seeing tapes of her mom is looking to be the least of Bobbi K’s concerns.  The cover of the Enquirer reports that is Bobbi Kristina is getting married to Nick – but even worse – Whitney’s daughter is already pregnant!  If this turns out to be true then we will need to consider a conservatorship for Bobbi K!

Also on the cover is Cher’s fury over Adele’s snub – why would Adele snub Cher – after all she resembles Chaz, can you see that?

The Enquirer promises to go into detail about Rosie’s explosion upon learning that Oprah canned her.

Very exciting is the promise to reveal spoilers and secrets of the popular show ‘The Walking Dead.’  We cover The Walking Dead here at CDL and if you missed the recaps or spoilers for next season click here.

Don’t know about you but I’ll be waiting at the newsstand to buy my copy of this week’s issue of The Enquirer!