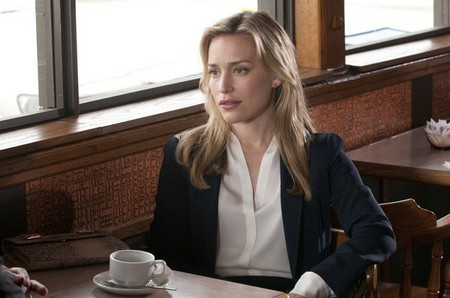 Most actresses enjoy a challenge and Piper Perabo is no different. The blonde stunner who first became a familiar face in 2000’s Coyote Ugly now stars as Annie Walker in USA Network‘s Covert Affairs. Perabo decided to take on a character that would push her to extremes and has spent the last two seasons doing her own stunts and learning bits and pieces of eighteen different languages in order to breathe realistic life into this government field operative. Covert Affairs is a gem of a show that is quietly building a rather large fan base and is about to debut its third season (on July 10th) with a premiere shocker. Celebrity Dirty Laundry recently caught up with the busy actress to discuss stunts, changes for the new season and more.

What do you suppose drew you to Covert Affairs and the role of Annie Walker in the first place?

Well, I’m always looking for a strong female lead and when this one came up, I really liked the fact that Annie had her own moral code. She doesn’t play by the rules of the game and I thought that would be some really fun conflict to get to play. I also feel like the writer’s and creator’s and I all have a similar sort of style too. We have a similar sense of humor and we fight about the same kinds of things. I feel like all of our imaginary worlds’ overlap in a lot of ways and that helps the show really mesh together.

As an actress, you’re called on to do a number of things in this role. What aspect of playing Annie has been the hardest for you?

Well, Annie is speaking 18 languages now and I told the writer’s to put a lid on it already! It’s starting to get a little bit ridiculous, although some of the languages have begun to get easier for me. In the beginning she didn’t speak any tonal languages and now she speaks Mandarin. The tonal languages are honestly REALLY difficult for me.

Covert Affairs is filled with both action and a lot of drama, which part do you prefer as an actress?

I really enjoy them both but my heart is obviously with the acting. I have to say, I love how we do the action on this show. Those are real run and gun shots done with hand held cameras. Most of the time we don’t have cops to shut it (the film location) down either. We just go kind of rogue and shoot it. Doing it that way gives the action a better, more raw feeling so I really enjoy it. Plus we get to travel a lot. We’ll go and shoot in this little country for five days and then we’ll leave to go to another little country for three days. Actually, we’re leaving for Paris tonight!

Is it hard for you to maintain relationships when you have to pick up and leave so often?

My life as a working actor has been like this a lot. The people in my life are very used to it and I actually get more time off than someone who has a regular 9-5 job. Although I don’t get to see everyone every evening, I’ll then have three weeks off, so it pays off but in a different way.

What can you tell us about the new season of Covert Affairs?

Well, Annie and Auggie (the now blind, former CIA op played by Christopher Gorham) will be going into different, more secretive departments. My office is now in a bunker in the basement, while he is working with the really high up powers of the CIA. We’re not just physically far apart but now we’re also emotionally very far apart because of what is going on in our personal lives. We start to see less and less of each other as the season goes on and that begins to cause real problems. Annie and Auggie support each other in a way that ends up solving things and so when they aren’t together, wires get crossed all over the place. The dynamic between them also changes because while Annie realizes she has feelings for him, she’s watching him instead be with Parker. It always puts a strain on the friendship when one person feels more strongly than the other. The scenes with Auggie are fun to play because since the character is blind, Annie can just sort of obviously be in love with him and as long as she doesn’t say anything, he’ll never know. There’s a lot of keeping her feelings under wraps while letting the expression play on her face. That’s a lot of fun to play and you can tell a lot about Annie by how she looks at Auggie.

What have you learned about Annie, heading into this new season?

Well, we never wanted her to become too expert at things, too fast. One of the ways we’ve likened her is to a teenager who just got their driver’s license. Even though they’ve only been driving a few weeks, they think already they’re a great driver. She’s a person with newly acquired power and she thinks she has it all under control. That can be a huge danger and I think Annie is now ripe for that kind of situation. It’s going to cause a lot of problems for her.

Annie’s moral gray area seems to keep shifting and getting bigger. Will we see more of this?

I think as Annie gets higher security missions and more personalized things to do, she just has to find a way in. Sometimes that way is becoming a bit more morally ambiguous. In order to be at that level of operative you need to be willing to blur those lines. I think Annie’s ambition to play in the big leagues will really come up against her moral code this season. You’ll have to keep watching to find out.

Covert Affairs premieres Tuesday July 10 at 10pm on the USA Network!  Check out the sneak peek of Season 3 below.