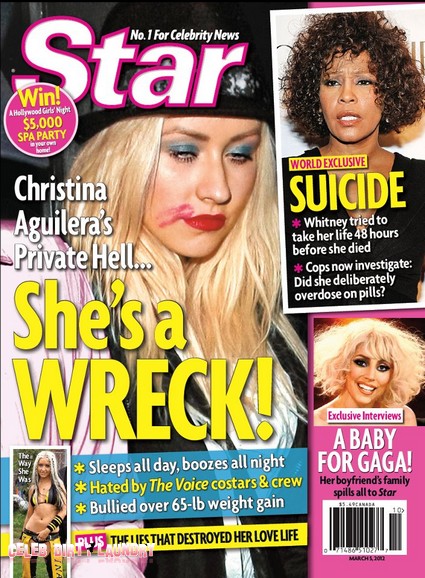 The current issue of Star Magazine features the cover story ‘Christina Aguilera – She’s a wreck.’  The magazine claims that The Voice’s Christina Aguilera sleeps all day and boozes all night.  They go on to claim that she is hated by her The Voice co-stars and crew.    Apparently poor Christina is also being bullied over her 65-lb weight gain.

This week on Howard Stern he made fun of her weight gain while he was interviewing The Voice co-star Adam Levine.  Howard said: “Why do you think she’s got so heavy, is she upset? She used to be so f**king hot! And her clothes are too tight, am I right?  When you’re a plus sized woman, you can’t wear the tight clothes anymore”

Adam did not exactly jump to her defense but did say: “I wouldn’t go that far actually.  Her clothes are tight, she likes to wear tight clothes!  She clearly likes to talk about being comfortable with being a woman, and snapping her fingers and doing the whole (diva) thing.”

Christina has been criticized the past couple of years about her weight gain and has said: “As long as I’m happy in my own skin, that’s all I need. I’m happy with where I’m at. I have a boyfriend that loves my body. I love my body.”

Good for Christina, Howard Stern is an assh*!e!  Do you think his comments about Christina were appropriate?  Sound out in the comments below and let us know your thoughts!

The magazine ends off their claims by saying they know the lies that have destroyed her love life.  Also included in this week’s issue the magazine claims that they have the scoop on how Whitney tried to commit suicide just 49 hrs before she died and they say that the police are investigating whether she drowned the pills on purpose.

To find out all this and more, pick up the current issue of Star Magazine!