Did “The Voice” Judge Christina Aguilera Hit On Vanessa Hudgens? 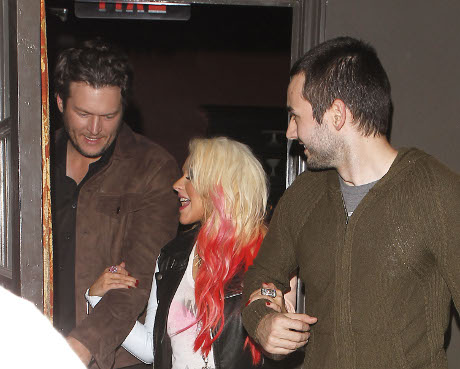 Christina Aguilera definitely isn’t shy about her sexuality, and over the years she hasn’t made any attempt to hide her affections for women, but did The Voice judge attempt a hit on younger actress Vanessa Hudgens? According to a source, Christina Aguilera propositioned lil’ Vanessa to have a good sexy time with her and her boyfriend Matt Rutler.

It all went down at a hip happening Beverly Hills party, which was celebrating the release of the new Samsung Galaxy Note II. Apparently there was something super funky in the air that night because all sorts of celebs were losing their super sexy cool. The Samsung Galaxy launch bash was also where Liam Hemsworth was caught getting cheeky with a random blond girl (not Miley Cyrus).

However, this whole disastrous proposal could also be booze talking. She appeared quite drunk, reports the magazine: “There were vodka bottles strewn all over her table, and she seemed to be glued to them. Eventually Matt looked like he had taken on the role of babysitter.”

“She spent a lot of time on the dance floor gyrating next to Vanessa, who looked like she was having fun with the situation in a good-natured way. And the more Christina drank, the more her kinky side seemed to come out. It really seemed like she was playing the role of seductress – with Vanessa as her target! Out of the blue [Christina] stumbled over to Vanessa and begged her to come back home with her and Matt!. Vanessa was taken aback but smiled and politely declined the offer.”