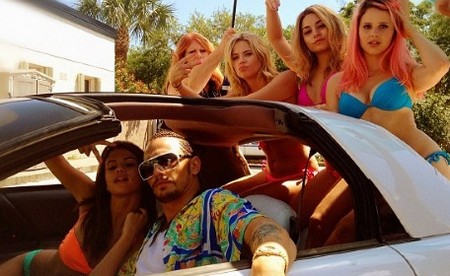 Now before I get ahead of myself and freak out – James Franco is not channeling Kevin Federline.  He just resembles him in his latest role in the new film ‘Spring Breakers’.  This instagram post was tweeted by his co-stars Selena Gomez and Vanessa Hudgens – who have been happy tweeting away pics of their fun times on set.

This latest picture is of the girls and their co-stars relaxing and chillin’ in their bikini’s (as you do) with Franco playing an apparent drug dealer and sporting a goatee, slick-back hair and cool-cat shades.  Because this is what happens in real life during spring break – right?

It feels like just yesterday I was rocking my itty-bitty blue bikini and bright pink hair.  Ahhh…. the days gone by.

All I can say is that Franco still looks hot, even if he looks like K-Fed.  The film (obviously people, do not expect a drama here) centers around four college girls who land in jail after robbing a restaurant in order to fund their spring break vacation.  In comes Franco, who bails them out and wants them to do his dirty work.

James Franco as a stoner drug dealer? I’ll buy it – and I might just rent it!