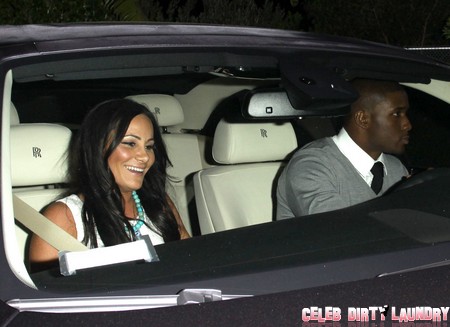 Why is Kanye West always so aggressive? Why can’t he be more Zen like us and visit a park with dogs and couples and balloons over weekends? Sunday evening, in the sprawling metropolis of Miami, Kanye and Kim Kardashian had a bit of a run-in with Kim’s past. According to InTouch, West and Kardashian bumped into her ex, Reggie Bush, while leaving the hottest restaurant in Miami, Prime 112.

They munched down on expensive food and drinks and left the restaurant to return to their celebrity lives and do celebrity things and have celebrity sex. Unfortunately for West and Kardashian, they bumped into Bush as he left the restaurant opposite them with his pregnant girlfriend, Kim K look-a-like Lilit Avagyan. An eyewitness told InTouch, “Kim and Kanye had a very discreet dinner in a private room with the curtains drawn at Prime Hotel while Reggie was with his girlfriend across the street at Prime Italian. Kim and Kanye got there around 5:30 p.m. and made a big scene when they exited two hours later.”

An ex-bumping is awkward enough, but what makes this story so spectacularly “OMG-I-died-inside-that-time-when” is the photographer bashing by West. A camerawoman (paparazzi) asked West if he congratulated Kim’s ex on the recent news of “his impending fatherhood”. West did not like this question, so he lurched forward and grabbed for the woman’s camera. Kim dotingly held West’s hand while he attacked the paparazzi and smirked. Was it an awkward smirk? Was it a “you-had-it-coming-bitch” smirk?  We’re not completely certain, but it sure as hell looked devilish.

The paparazzi woman fled for her life and the couple left the famous restaurant in a Rolls Royce soon after. Once again, in true Kanye West fashion, he pushed people out of the way to make room for his massive ego. Shame on you Kane, shame on you…

What do you think? Would you have punched the pap? Let us know in the comments below.

If you want to see little bitch boy Kanye in action check out the pics HERE.  I only wish Kanye would try to tangle with Reggie rather than a female paparazzo!