Jessica Simpson Second Pregnancy Confirmed, Is Anyone Shocked And Surprised? 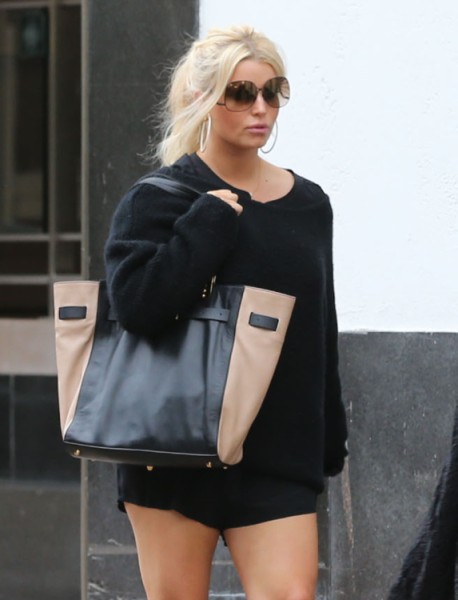 Jessica Simpson finally spilled the beans on the worst kept secret in Hollywood. She’s pregnant with her second child! In case you weren’t convinced by the tabloid cover or the noticeable baby bump or the huge black bags she’s been using to cover said bump, we finally have some concrete evidence.

It all went down at Joe’s Simpson’s holiday party on December 11.

“As Jessica and her husband were about to leave the party somebody asked her, ‘How’s the baby?’ and she boasted, ‘Which one?! I’m pregnant again!’” a source told Celebuzz. “She was so happy, smiling and giggling.”

But this is old news, right? I’m not sure why Jessica doesn’t confirm to the tabs but there must be some monetary reason. There always is with Jessica. I’m more interested in Joe’s party. Do you think his boy toy was there? Ashlee Simpson showed up as well as her ex Ryan Cabrera. How does this kid manage to stick around? I was worried for a minute when I saw he was there. I thought maybe they were rekindling something since Ashlee broke up with Lucky Luciano Vincent Piazza but then I did some research and found out he was still with Riley Keough. Thank God! I’m no huge Ashlee fan but I still have hopes that one of the Simpson girls won’t end up with a Kevin Federline scrub.

Anyway, what do you make of the Jessica Simpson/second pregnancy confirmation? Why won’t she go public to the magazines? Could she possibly have something up her sleeve other than a ham sandwich?