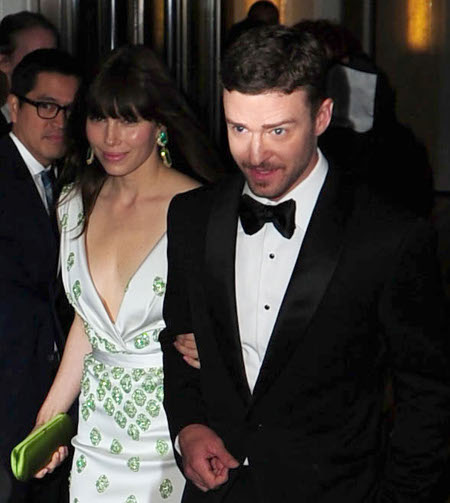 Justin Timberlake and Jessica Biel got married earlier today in a picturesque ceremony held in Italy. On October 17, Justin was pictured by Life and Style sporting a scruffy beard and a grey fedora as he mingled with guests (reported to be over 300) who sipped champagne on the grounds of an enormous castle. The guests later enjoyed a lavish 10 minute firework display in a nearby seaside town.

An insider told the New York Post that Justin, 31, and Jessica, 30, chose the Italian location, near Naples, because it “means a lot to both of them.” Guests included Andy Samburg, Justin’s partner in crime from SNL’s infamous digital shorts (remember D**k in a Box?); Timbaland, his frequent producer; Jimmy Fallon and his wife; and many other VIP members.

The couple took drastic measures to keep details of their wedding secret. A source told the newspaper that a private plane was flown out of New York to take guests to the castle in Italy. However, the event was shrouded in secrecy and guests were not told exactly where they were going before boarding the plane. I have a feeling that being given a free plane ride on a private jet to Italy wouldn’t be that annoying.

Justin and Jessica got engaged last December and have only sent vague “save the date” notifications back in early summer. Also, guests were “prohibited from bringing cameras or phones,” according to the New York Post’s source. The whole “please no cameras or phones” request from celebrity weddings always makes me a little suspicious. Is it really because they want to keep it a secret and private, or is it because they want to protect their million-dollar contract for exclusives with whatever magazine decides to offer that paycheck? Hmmm.

“It’s great to be married, the ceremony was beautiful and it was so special to be surrounded by our family and friends,” the couple said in an exclusive statement to People Magazine.

How do you feel about the Justin Timberlake/Jessica Biel wedding? Wish you could’ve attended?