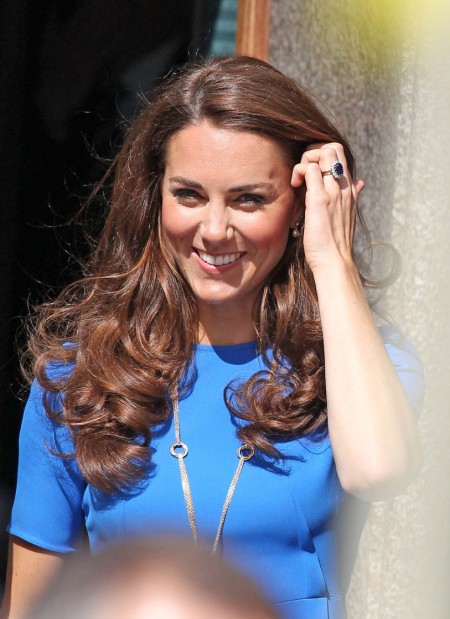 The Kate Middleton Olympic parade is going full steam ahead amid rumors that she’s stepping over her uncle-in-law and hogging all the spotlight away from the other senior royals during London’s games.

Kate will be attending a benefit tonight which is a part of the Great campaign. It’s aim is to promote and enhance Britain abroad and focuses on reasons to invest and visit the country. What? You mean that amazingly esoteric opening ceremony didn’t do that enough? Anyway, Kate’s flying solo again but she definitly won’t be alone. The Mirror reports 800 people are expected to attend  including the UK’s leading creative companies, industry figureheads, as well as guests from overseas businesses and organisations.

None of that is too interesting for gossip. A minor detail worth pointing out is that Prince William is MIA again. I don’t know what he’s doing instead. I saw pics of him watching the soccer match today with David Beckham so maybe that was all he felt like contributing to today. I have a feeling Wills only wants to do what Wills wants to do whereas Kate is only too willing to put on her “can do” gloves and show everyone she’s a valuable asset to the firm.

Maybe it’s that insufferable spirit that’s driving Prince Andrew so crazy. As we reported yesterday, Andrew continues to be p-ssy about the fact that his brother, Prince Charles, is streamlining the monarchy and cutting the budget so that mostly his immediate family will tackle the majority of royal responsibilities. His reason behind this is that it’s cheaper and appears more modern to the public who like to b-tch and moan that the royal family lives off them too much. Andrew wants his daughters, Princes Eugenie and Beatrice, to have a larger role as working royals but no one cares and has basically been ignoring his whining although that’s not stopping him from acting a fool at parties and ranting for all to hear.

What’s eyebrow raising about the party Kate is attending SOLO is that it’s an industry and trade party and Andrew resigned as Trade Envoy last year. The Mirror speculated that Kate and William are slowly but surely moving in on Andy’s old grounds but the palace is quick (very quick) to squash that idea. A source said, “One of William, Kate and Harry’s main jobs is to show off Britain on the world stage during the Olympics and Paralympics. Occasionally this will mean doing an industry engagement but there are no specific plans for them to do more work in this area.”

OK, so if Andrew resigned then he should have no reason to get sh-tty with Kate for filling his shoes. But I don’t think Andrew is the most reasonable and rational. And he has issues with Kate’s supremacy nowadays. After all, he did say that his daughters were the only true “blood princesses” of their generation. Those aren’t the words of a dude who’s welcoming the middle class Middleton into the firm with open arms, are they?

It just doesn’t seem like all is well in the House of Windsor. They might smile and be polite under the glare of the Olympic lights but there’s a serious power struggle going on behind the curtains and Kate’s in the middle. I’m not blaming her at all. This is between Charles and Andrew. Kate’s just doing what she’s told. I think that’s why Charles likes her so much! Not so sure about William. I know you think I’m making something out of nothing – I’ll be the first to tell you that maybe I am – but William’s dealing with issues. He can’t keep the pout off his face which is probably why Kate would rather hang with the always affable Prince Harry. Do you remember William dancing and giggling like a little girl during the concert for his mother a few years back. It’s here if you need a reminder. Where’s that guy? What I would give for William to flash us a genuine smile. I know he’s older, and perhaps feeling the burden of royal life more, so maybe it’s just that. I’m just saying, the whole world is watching and he can’t even gift his wife with a cheeky grin? Something just doesn’t feel right! Go ahead, give me the hate. I’m ready.