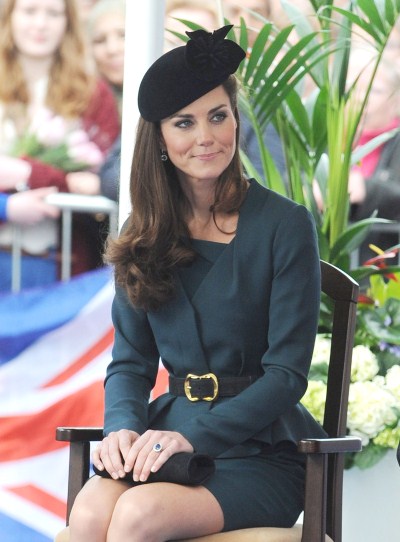 Kate Middleton has admitted to a fan of the royals that Prince William ‘is fine – but I’m missing him desperately!’  Kate has been separated for weeks from her husband, the future King of England, while he completes his Royal Air Force mission in the Falkland Islands.  While Prince William has been deployed in the Falklands Kate has soldiered on facing her official royal duties like champ… or maybe even like a queen!   Kate received training from Queen Elizabeth II herself on how to properly acquit herself of her royal duties and Elizabeth is known to be very fond of her granddaughter-in-law.

Poor Kate was without her husband for her first married Valentine’s Day.  The Duchess of Cambridge spent the day in Liverpool for on a solo tour of some of the city’s charities including a hospital providing care for more than 200,000 children each year. Kate also visited an alcohol-free bar, The Brink, run by the Action on Addiction charity, of which she is patron.  Although Kate put on a brave face it was clear that she was pining for William.

Kate Middleton has revealed that she’s finding it hard being separated from her husband Prince William during his posting to the Falkland Islands.

The 30-year-old visited Leicester’s De Montfort University with the Queen and Prince Philip yesterday to kick start the Diamond Jubilee tour and was asked how Wills is doing by a member of the crowd.

RAF Sea King co-pilot Wills, 29, has about 2 weeks left of his 6-week deployment in the chilly archipelago off Argentina.

While he’s away, Kate’s had to make a number of public appearances without her husband by her side – and though she’s admitted she worries about Wills when he’s flying helicopters, she stands by his commitment to the job.

‘My job is to support my husband,’ Kate said last year.’

‘You should always support your husband.’

Do you think that Kate has weathered Prince William’s absence well?  Sound off in the comments below.