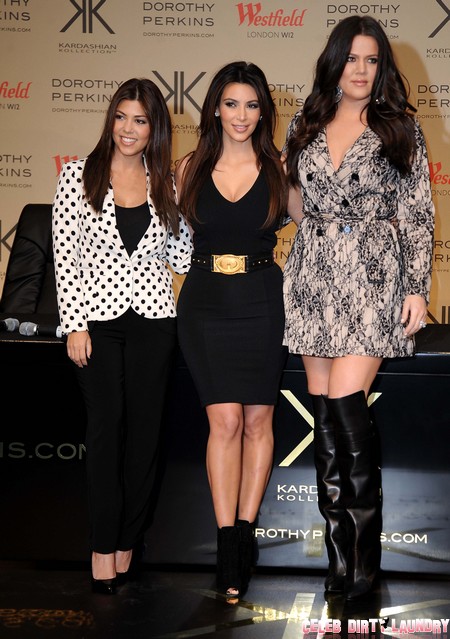 It looks like Kim Kardashian has finally hit her breaking point and is now begging for her sister Khloe Kardashian’s help. Celeb Dirty Laundry told you last week about Kim’s absolutely vindictive jealousy towards Khloe. We all know that Kim hates not being the center of attention in her family, so how dare Khloe land that hosting gig on The X Factor!  She has fumed because she believes Khloe is now the more bankable, breakout star of the family while Kim is just known for her bad attitude, busted relationships and huge ass.

We’re hearing that Kim wisely came to her senses and stopped slamming doors and pouting. She has dropped her pride enough to try and enlist Khloe’s help. Kim has this idea that appearing on The X Factor will magically win her credibility in the entertainment industry so she’s begging Khloe to get her on that stage for an appearance.

I’m sure Khloe would love to help her sister but the show’s ratings are already heading for the toilet! They have dropped since Khloe began appearing and the show only average HALF the number of viewers that Simon Cowell originally promised the producers.  There is absolutely no reason to parade Kim across that stage and if the producers agree to do it then it will come across like the tackiest of gimmicks. If judges like Britney Spears and Demi Lovato aren’t making people watch then people who tune in to see Kim will be doing it as a joke.

This is another example of Kim trying to insinuate herself into a situation in which she has no business being. Earlier this week we told you about her wanting to take tea with Kate Middleton! She seriously needs to stop overestimating her own fame!

Will Kim be headed to the X Factor for a guest stint? Maybe they’ll put her in the audience, where she belongs! Tell us your thoughts on this chick’s desperation in the comments below!