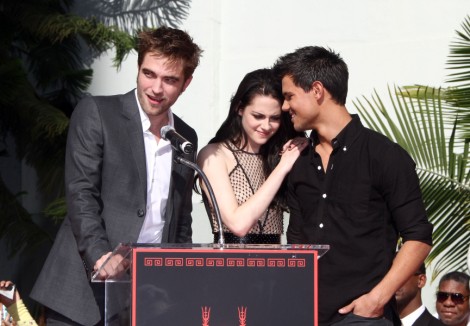 Kristen Stewart may not have cheated on Taylor Lautner and crushed his life and spirit like she did that other guy in the Twilight movies but that doesn’t mean she didn’t screw him in the process as well. With the news that Kristen and Robert Pattinson are both ditching the four upcoming Twilight conventions I was shocked when it was announced Taylor would be joining them in their bid to shy away from the media attention. So I couldn’t help but wonder how Taylor’s career is getting affected by Kristen’s trampiric actions.

So let’s think about this. I could understand why Rob and Kristen would opt out of the conventions, but why Taylor? He’s got nothing to hide. True, he’s not as much of a draw as Bella and Edward but there are people out there who scream over his washboard abs and actually buy Team Jacob shirts. He has his fans. And unlike Rob and Kristen who have always showed a love/hate relationship with Twilight and the exposure it’s handed them, Taylor has had no problem milking it up as everyone’s favorite third wheel. Unlike Kristen and Rob, Taylor has always been hungry for the spotlight and has understood how to play the game. And he knows it’s not over. Taylor’s career isn’t as hot as his co-stars’. He needs this kind of promotion and all the media attention he can get especially since this is the last Twilight film. If Taylor’s going make his post-werewolf career happen – he’s going to need his fans to do it. Shunning them isn’t the best way to go.

So why couldn’t Taylor just go to the conventions himself? If there some ego at play? Did his fur get in a bunch when the studios said, “Kristen and Rob can’t make it but we’ll throw in Taylor!” Or is the answer as simple as Taylor’s not as big of a name. I can’t get behind that theory. A Twilight convention would sh-t its pants if the dude who played Bella’s baseball playing stepfather showed up to sign autographs. It would flip its lid for Taylor.

So what then? Could it be a solidarity thing? If the three stars can’t make it than no one should go? If that’s the case, Taylor is really getting the short end of the stick because I don’t see Kristen and Rob sharing any stage any time soon. I wonder if he’ll go to the MTV Video Music Awards. So far we’ve heard Kristen is running away from that to do On the Road promotions at TIFF and Rob hasn’t said either way yet. It’s not like the Video Music Awards are comparable to MTV’s Movie Awards but I’m sure Summit would have loved it if the threesome could have made it happen.

So what’s a guy to do? So far, Taylor has done nothing. Apparently he made a remark that he’s “disappointed” in Kristen, but other than that, he’s stayed pretty quiet. I’d be disappointed in her too! Homeboy needs to work and he’s not busy. Filming for Grown Ups 2 is over and he only has one other film listed in pre-production. I think Taylor could have used those Twilight conventions. What about you? Do you think Taylor’s getting screwed as the Kristen/Rob love saga gets played out?