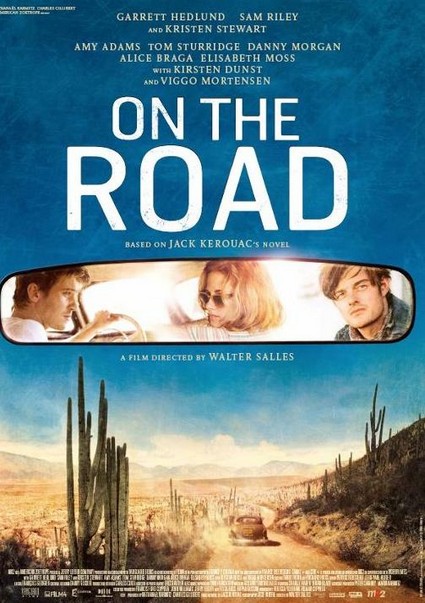 Finally the wait is over and the first movie poster for the film ‘On the Road’ is out. The movie poster features Kristen Stewart, Sam Riley, and Garrett Hedlund with Amy Adams, Viggo Mortensen, and Alice Braga co-starring. The film is based on the famous novel of the same title written by Jack Kerouac.

“After the death of his father, Sal Paradise (Sam Riley), an aspiring New York writer, meets Dean Moriarty (Garrett Hedlund), a wild and infectiously charismatic ex-con. They hit it off immediately. Determined to avoid the pitfalls of a narrow, prescribed life, Sal hits the road, joining Dean on what evolves into a life-changing physical and emotional odyssey. Thirsting for freedom, they discover the world, the ecstasy of experience, the connectedness of humanity and ultimately themselves.”

I don’t know how I feel about KStew starring alongside hunky men that aren’t Robert Pattinson, but I’m a fan of Kerouac so I suppose it’s worth seeing. Check out these just released stills of the gang on the road (pun totally intended) – no word on a release date but keep your ears and eyes open.