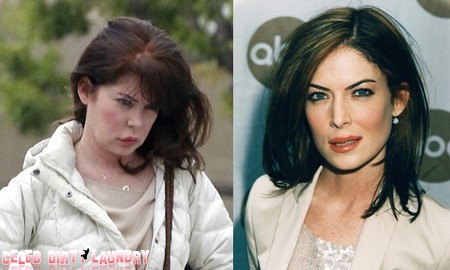 I understand the pressure to stay young and fresh in Hollywood – it’s a fickle world where you can be the ‘it’ girl one minute, and then yesterday’s news the next.  We’ve seen countless times many celebrities opting for cosmetic surgery in hopes of cheating the ticking age clock.

Lara Flynn Boyle is among those stars, and recent pictures prove that she might have gone a little overboard.  The 42-year-old stepped out on Saturday with painfully looking puffy lips sparking rumors that she has once again taken to the knife.  Back in 2010, Boyle showed up at a screening with a similar looking puffy and swollen face – a face that did not look her own.

Lara has been quoted as saying that getting old is her worst fear – a fear I’m sure she shares among many women.  But in saying that, it is inevitable and altering one’s appearance and looking plastic isn’t the route I want to go.

Click on the thumbnails below to enlarge Lara Flynn Boyle seen heading to a liquor store in Los Angeles, California on March 31, 2012!