Jennifer Aniston Pretends Her Beauty Is Natural And Cheap 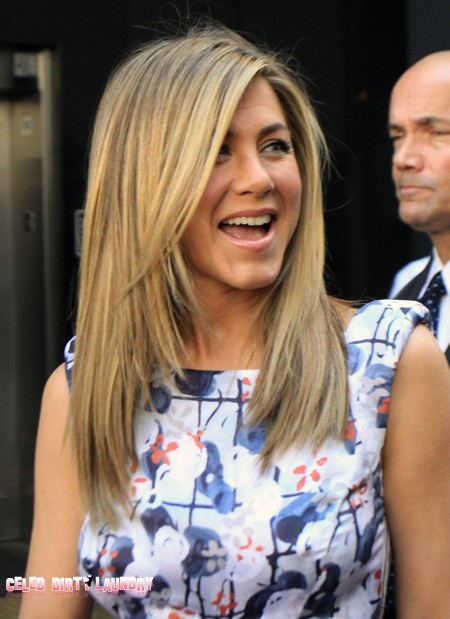 Jennifer Aniston would like us to believe that claims that she spends over $7,000 a month on her beauty regimen are “greatly exaggerated.”  Jennifer is still in denial about her age and all the cosmetic surgery she has had- so why would this be any different?  Jenn just loves to pretend that is the all-natural girl-next-door type.  We know better.

Recently Jennifer revealed to Conan O’Brien that she has had cosmetic surgery. We always knew that Jennifer Aniston has had tons of cosmetic/plastic surgery, including two nose jobs, but the celeb always denied it and pretended she was a ‘natural’ beauty. In fact pics show that prior to her nose jobs she looked like Barbara Streisand – but without the singing talent. Jennifer admitted to Conan that she had an intense laser peel which burned off the surface of her face. Conan noticed Jenn’s smooth complexion, and after complementing her on it learned the truth – it wasn’t natural!

The 43-year-old former ‘Friends’ actress – who is dating her ‘Wanderlust’ co-star Justin Theroux – was reported to invest a massive $150,000 a year in looking good – and we believe it’s probably even more.

According to website Shine:  Jennifer splurges $1000 a week on private yoga sessions, and subscribes to a $350 a week home delivery food service. On top of that, the report also claims she forks out $400 for a neck ointment by Euoko, and another $400 on regular Tracie Martyn facials amongst numerous other expensive products and treatments.

Always in denial Jennifer told People Magazine:  “Although I am a sucker for an amazing moisturiser, love a great facial, have been using the same cleansing bar since I was a teenager and have always been a dedicated tooth-brusher, reports that I am spending eight thousand a month on a beauty regime are greatly exaggerated.”

What a liar!  Yes we are saying that Jennifer is not telling the truth.  The woman has had hundreds of thousands of dollars of plastic surgery, including a possible boob job.  She spends more on trying to look good than the sum of what most families spend on their health care, food, and children’s education.  Tell the truth Jennifer and shame the devil.