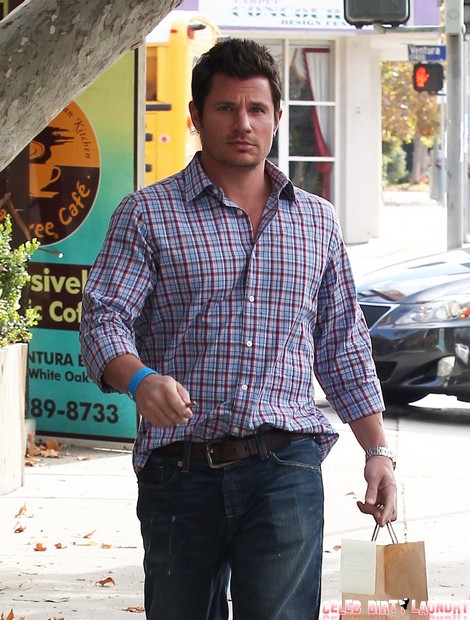 Nick Lachey has always come across as a fairly nice dude but I’d say after his weekend brawl  that led to him being thrown out of Qualcomm Stadium, he has two sore spots – do not insult his sports team and above and beyond all else – don’t take a shot at 98 Degrees!  Apparently Nick and his buddies are die-hard Bengals fans and they were seated near a group of Chargers fans as the two teams squared off this past weekend.  Nick was probably throwing back a few drinks when he started to heckle a guy wearing an Igor Olshansky #99 jersey (Olshansky played for the Chargers from 2004-2008). TMZ interviewed the guy who told them that for most of the second half of the game Nick was bothering him about the jersey until finally enough was enough.

According to the Chargers fan Nick made a particularly offensive comment and the guys girlfriend fired back that Olshansky lasted longer than Nick’s boy band! Couldn’t you just see Nick’s face when that comment flew? Talk about pushing probably the biggest button that Nick has because it has to still sting to have been uber famous with girls screaming over him for like, 20 minutes only to never repeat that kind of success again.

Nick reacted by jumping over seats, grabbing the guy in the jersey and choking him on the ground – all of which was captured on video footage. Qualcomm Stadium security quickly acted and Nick and his buddies were all escorted to the door while the Chargers fans were able to stay. Of course Nick saw absolutely nothing wrong with his behavior and later took to his Twitter to brag about it saying, “Just got kicked out of chargers stadium and couldn’t be prouder. Go go Cincy Bengals.”

TMZ reports that the Chargers fan plans to file a police report against Lachey.

If a simple comment by a stranger causes Nick to react like that I have to wonder how ugly he is during his fights with his high maintenance wife, Vanessa Minillo!   Does Nick have anger issues for real or was this an isolated incident? Tell us your thoughts in the comments below!

Check Out The Video of the Choking and Assault Here!