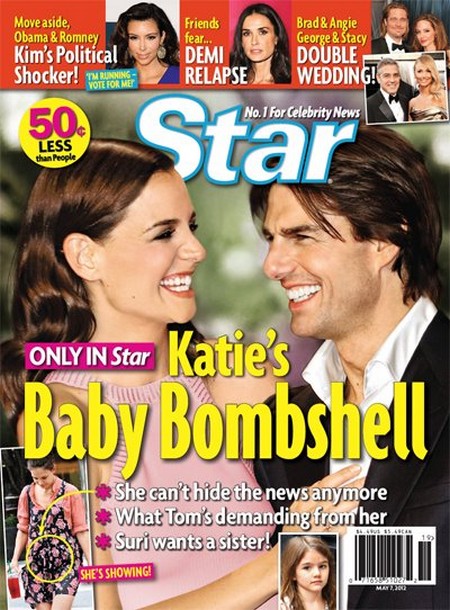 Katie Holmes is pregnant again and Tom Cruise is delighted that he and his wife will have a sibling for Suri!  This week’s issue of Star Magazine has the cover story ‘Katie’s Baby Bombshell,’ and promises to reveal details.  Apparently Katie just can’t hide the news anymore and we will learn what Scientologist Tom is demanding.  Star tells us that little Suri wants sister… does she get to pick?

Star magazine reports: “She’s struggling to contain the news,” a source close to Katie tells the magazine.  “She can’t wait to be a mom again, and the sooner she can tell the world about it, the happier she’ll be,” the source adds.

Six-year-old Suri Cruise was overheard asking Katie during a recent New York City visit if her baby sister was in Katie’s tummy!” an insider reveals to Star.  “Katie laughed and whispered something in Suri’s ear,” the source says. Hopefully Star has more to go on than this!  “Katie thinks the baby will bring the family closer together,” the source says.

Star also promises to delight us with more news about Kim Kardashian’s political nonsense – they claim that Obama and Romney better move aside.

Sadly Star claims that Demi Moore is rapidly heading for another collapse and a relapse is imminent.  This is not surprising as nothing substantial has changed in Demi’s life since her overdose and emergency hospitalization.  Even worse, Ashton Kutcher is hanging with Hollywood hotties young enough Demi’s daughters – maybe even granddaughters!

Star is really going for broke this week.  Let’s see what pans out here.  Do you think Katie is pregnant?  Let us know in the comments below.