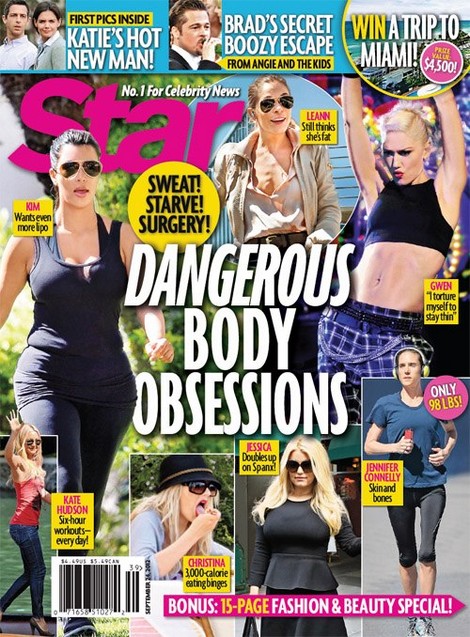 This week’s issue of Star Magazine features the cover story ‘Celebrity Dangerous Body Obsessions.’  The magazine has all the details of the dangerous lengths celebrities will go to to have the perfect body.  Some celebrities are willing to sweat, starve and suffer through surgery to dramatically alter their bodies.

The first celebrity under their microscope this week is Jessica Simpson.  32-year-old Jessica had her big reveal on Katie Couric this week and she claims she lost 40 pounds and only has a mere 10 lbs left to go to reach her goal weight.  Although Jessica has made a deal with Weight Watchers and she credits them with her weight loss, some believe that she may have had some other help with her weight loss.  The magazine claims that Jessica has not lost the weight she says and that she was actually wearing 2 pairs of Spanx and using hair and makeup tricks to appear thinner.  There are yet other people who believe Jessica may have gotten a little help from her friendly Doctor.   I just can’t get behind the plastic surgery allegations. I’d need more proof. She just doesn’t look good enough and I don’t think she’s smart enough to only take off one layer so people don’t get suspicious.  What do you think?

The next celeb on Star’s hit list is LeAnn Rimes.  LeAnn check into a rehab facility recently and she claimed the reason she did was because of ‘anxiety and stress.’  Star is suggestion the actual reason LeAnn checked in was because she has a eating disorder and her family is worried, “She’s abusing laxatives and constantly forcing herself to throw up after eating.”  They go on to claim that her hubby Eddie Cibrian has to take some of the blame.  LeAnn has always said, “Eddie loves skinny women and would never be with a women who wasn’t tiny.”   The photo of LeAnn is really disturbing she has an open shirt and you can see her ribcage or “ribcage cleavage” as Star calls it.

Jennifer Connelly is on the list of dangerous body obsessions and I have to agree.  The photos of her look skeletal.  Jennifer 5’7″ and is said to be down to 98 lbs.  Jennifer is running 6-10 miles a day to keep her weight low.  The 41-year-old looks scary thin and friends are worried.  Repordidly, she eats sushi three-nights a week and not much else.

A perfect body has become an obsession for many celebrities.  It is not unusual for a celebrity to excessively workout, abuse steroids, abuse drugs and have eating disorders.  What do you think of this Celebrity Obsession, normal or dangerous?  Hit the comments blow and let us know.

Check out our video below of how celebrities have cellulite just like you and I!