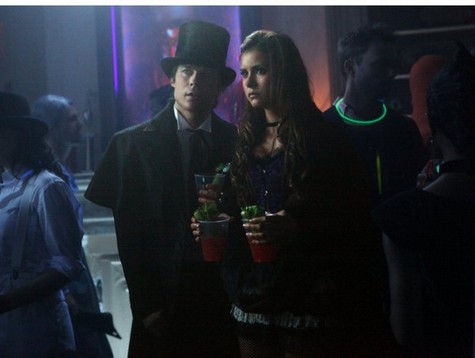 Tonight was another crazy episode of THE VAMPIRE DIARIES!  I am really enjoying this season and Elena’s struggle to keep her humanity while struggle with becoming a vampire.  On tonight’s episode we learned a lot more about  Connor, the vampire hunter, we also learned he is one of “the five!’  We don’t know what that means yet, but I am sure we will learn more next week considering the title of the episode.  We have gotten our hands on a  sneak peek video and some spoilers to wet your appetite for next week’s episode 4 titled “The Five.”

Also on tonight’s show Connor continued his search to uncover the secrets of Mystic Falls and tried to convince Jeremy to work with him.  We all know how well that was going to work.  With Dr. Fell’s help, Damon and Klaus question Connor, but the confrontation took a lethal turn. Trying to keep her new life as normal as possible, Elena was determined to continue her senior year at Mystic Falls High with support from Matt and Caroline. Rebekah’s arrival at school made it difficult for Elena to control her anger, but she learned that confronting Rebekah can be extremely dangerous.  All in all a great episode and a lot more happened.   If you missed tonight’ show, we watched it  and we recapped it here for you!

Spoiler alert: If you’re one of those people who doesn’t like spoilers, stop reading now! We have some juicy spoilers for you about the season 4 episode 4 of CW’s “The Vampires Diaries.”

Official CW synopsis of next week’s episode: Damon goes with Elena and Bonnie to visit Whitmore College, where Professor Shane is taking over the Occult Studies classes formerly taught by Bonnie’s grandmother. At a fraternity costume party, Damon takes advantage of the wild scene to give Elena a lesson in choosing a victim. Rebekah’s attempt to buy Matt’s forgiveness falls flat, but she is intrigued by unexpected news from Klaus. When Stefan questions Klaus about Connor’s motives, Klaus reveals a long-ago encounter with a powerful group of vampire hunters, but it’s Rebekah who delivers the information that stuns Stefan.

On next week’s show the gang is crashing Bonnie’s trip to look at Whitmore college .  Damon and Elena head to a frat costume party when they get there. (Check out pics below of Damon and Elena in costume)  As they enter the party Damon says, “Douche Central.”  Damon tells Elena, that they will be eating very well, LOL.  Ya gotta love Damon!  In the preview we see Elena feed on a few people and Damon asks her how she feels,  she says as she hugs him dancing, “I want more!”  Yikes Stefan is not going to be pleased about this!  Is this going to cause more problems between the two brothers?

The Vampire Diaries Season 4, Episode 4 “The Five” airs on the CW on November 1st, 2012.   Check out the preview video from episode 4 and let us know in the comments below what you think!