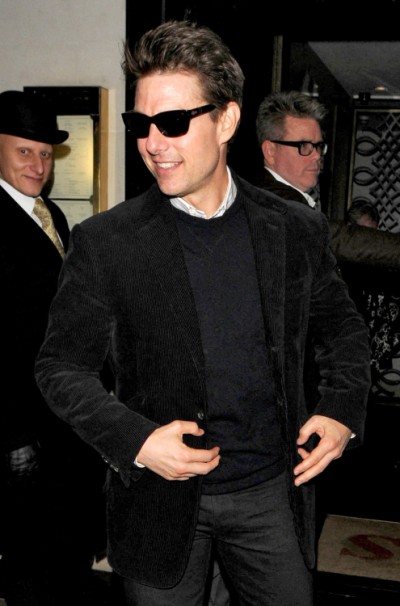 Ex-Scientologist Marty Rathbun is doing his darnedest to take the shifty religion, and all who derive power from it, down. That includes current Hollywood fallen child, Tom Cruise. In Rathbun’s new book, The Scientology Reformation: What Every Scientologist Should Know, he paints Tom as a maniacal, lost boy who’d rather beat his staff in an effort to be like Scientology leader, David Miscavige, than think for himself and be a decent human being.

Rathbun writes: “…Miscavige’s reaction to my escape was chilling. He ordered John Brousseau, his resident handyman – and the architect of most of the Tom Cruise vehicle and home upgrades – to install prison bars on all windows in the Hole so that no one else could escape.

“With me out of the way, Miscavige’s madness was unbridled. He began to tell Tom Cruise tales of having to physically beat the degraded beings in his environment to keep them in line. Cruise followed suit, doing the same to his own staff. Michael Doven, his long-time personal assistant, started receiving regular physical abuse from Tom. Another of Tom’s staff – a woman – was grabbed and slammed up against a file cabinet by Cruise for failing to show him proper respect. He railed and screamed, like Miscavige, when he discovered a near-microscopic chip in a drinking glass handed to him by one of his staff. He was convinced the degraded beings were steadily sabotaging him, stalking him like the zombies from Night of the Living Dead. Tom even physically abused the one-time international spokesperson for Scientology, one Tommy Davis.

“Miscavige was happy to have Tom ape his own psychotic behavior. He once briefed the inhabitants of the Hole that Tom was fully informed of their conspiracies to destroy Miscavige. He told the assembled that Tom promised to come to the Hole to give Yager, Ray Mithoff (the highest scriptural authority in Scientology) and the former executor of Mr. Hubbard’s will, Norman Starkey, black eyes if their confessions were not to Dave’s liking. In order to prevent the world’s biggest star from having to do Dave’s dirty work, the leadership within the Hole decided they had better do it first. The eighty staff went into a frenzy of punching and kicking the trio, fattening the lips and blackening the eyes of all three.

“By mid-to-late 2004 Tom was so locked in to Miscavige’s spell he was incapable of comfortable socialization with the outside world, at least on an intimate basis. He asked his best friend Dave to help him find a good-looking Scientologist wife, so he would not wind up with another degraded being like his previous two wives….”

And you know why I believe it? Because he let Katie Holmes go without much of a fight. She saw shit. He underestimated her and she took advantage of his craziness. I can’t see any other explanation. And yet people still kiss this guy’s ass. There was this huge story about Emily Blunt and Matt Damon hanging with Tom in London last week and they had a blast. And he just went out to dinner with Cameron Diaz and Penelope Cruz. Haven’t they heard the stories? Why do they put up with him? Is he that powerful in Hollywood? His movies suck lately. So do they feel sorry for him? Can they tell he’s really a scared, misinformed little boy? Are they trying to help bring him to the light? So do we sympathize with Tom’s beat downs now? I hope not. I think we should all take a page out of Katie Holmes’ book and stay away. She knew him best and she refuses to be in the same room with him. That should tell you something.

Do you believe Tom Cruise beat his employees in the name of Scientology?