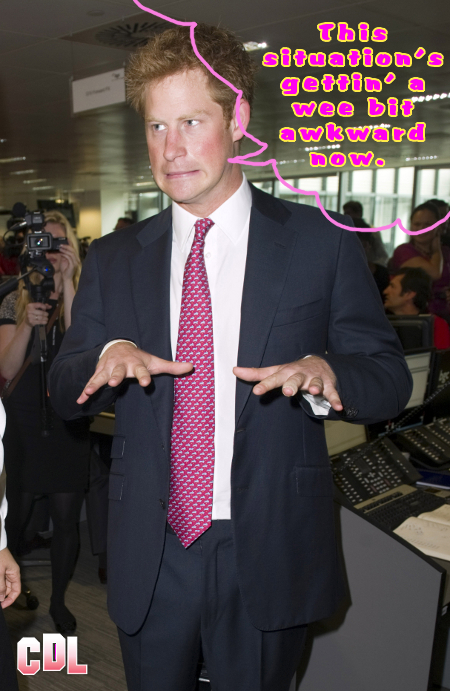 The letter begins: “Dear Royal Sir, we were amused and pleased by the photos of your recent frolic in Las Vegas. What happens there rarely stays there, unfortunately.” Ain’t that the truth. Harry definitely knows that now. “We would like to offer you the opportunity to truly become the coolest Prince of all time, by starring in a fun, sexy, big-budget adult film called ‘The Trouble with Harry.’ It can be shot in the locale of your choice,” the letter continues, “and will bring together your exciting Royal world and our thrilling world of beautiful women! Of course ‘little Harry’ will make an appearance too, but we assure you the sex will be well scripted, and the Crown Jewels will not be ‘minimized’ in any way.”

What a joke. Steven is notorious for reaching out to celebs with business props once naked photos and scandal emerge. Last year he offered $5 mill to Pippa Middleton to appear in a movie and $1 mill to her brother James. “Prince Harry is the one Royal we can all relate to,” Hirsch said to E! news. “This film would be a worldwide best-seller. Everyone would HAVE to see it!”

All I can say is everybody be careful because in a few days, if this whole thing doesn’t blow over even a little bit, I have a feeling the Queen is going to end the world. Literally. The Queen is a person that one simply does not mess with. To get all our coverage on the Prince Harry naked photo scandal click here.