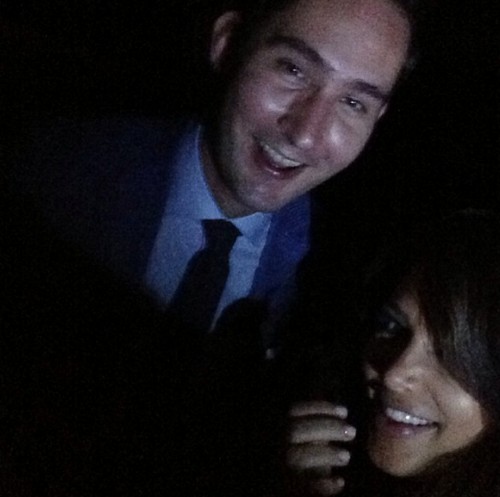 Kylie Jenner is fresh off a her super sweet 16 birthday bash, Kris Jenner is fresh off a bottle of premium wine, and Kanye West is fresh off getting getting embarrassed by fans’ boos at an L.A. Dodger game. Kimye ditched making deals with paparazzi, and wearing ugly expensive clothes to pay their respects to Kanye’s late grandfather, Portwood. They even brought North West, and her nanny, who looks like she could be an actress from ‘The Butler’.

“They brought North to meet some of the family members,” an insider reveals to Life & Style. “Kanye’s mother, Donda, is also buried in Oklahoma.”

Kim finally came out of hiding draped in a $30,000 handbag to put her and baby Nori’s matching eyelash extensions and butt pads in. She sucker punched Katie Couric on social media,and even shared a selfie of her and Instagram top dog, Kevin Systrom. It was terribly nice of her to support Kanye through his grief, and through her diet pill, starvation quivers.

West is feeling extra salty because his ex boo, Amber Rose, just got married this weekend. Maybe he was shopping for a Kim Kardashian ring out of desperation. Let’s remember, Kim doesn’t really like Yeezus that much. Kanye crushed on Kim for years. She rejected him like they did Ian Somerhalder for Fifty Shades of Grey. Then his money got up, Kim’s fans went down (after faking her wedding with Kris Humphries), and BOOM! He’s just a rebound.

Kim Kardashian supposedly wants another baby, but what she really wants is a break from the vicious diets, tranny-licious makeup, and Kris Jenner. Just like a camel can drink 25 gallons of water in 3 minutes, the Kadashians can hog the media spotlight every single day, and not get tired. Please keep ‘Keeping Up’. They’re thirsty.