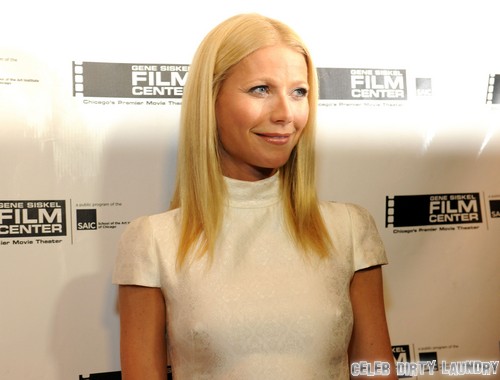 Gwyneth Paltrow’s been looking a little different lately, hasn’t she? Inevitably, every woman in Hollywood faces the same pressure, whether they admit it or not – especially actresses. Some women are strong enough to resist going under the knife – a la Meryl Streep, Diane Lane, etc – but usually those women are known more for their acting ability than their looks. Gwyneth Paltrow, while not a bad actor, is known more for her looks, her lifestyle, her husband, and her off-screen life than she is known for being an Actor.

In all of her recent pictures, Gwyneth’s been looking very drawn, and her face looks like it’s being pulled in different directions. While the explanation for that could simply be stress, it’s also a tell-tale sign of botox. That’s not all – her boobs look significantly smaller as well. What, you ask? Why on earth would anyone want to get a boob reduction?!

Well, as we know, Gwyneth has always been fanatically concerned about her weight. She has maintained a very strict diet over the years to control her figure, and she might have figured that a breast reduction might have been the way to go. Either that, or she hated her ‘sagging boobs‘ so much that she got them lifted. Now, this is a very serious and personal decision, so we’re not criticizing her for anything. Rather, just pointing out that there is a noticeable difference in pictures.

Of course, this isn’t the first time that Gwyneth’s changed her looks. Years ago, when she was at the top of the A-list and won an Oscar for Shakespeare in Love, her nose also suddenly became straighter and narrower. Sure, some people attribute to the weight loss, but the bone structure of your nose and face doesn’t change from weight loss.

What do you guys think? Boob job, or no boob job? Do you think Gwyneth would ever admit to going under the knife, especially since she’s already admitted to dabbling in plastic surgery? Let us know what you think in the comments.