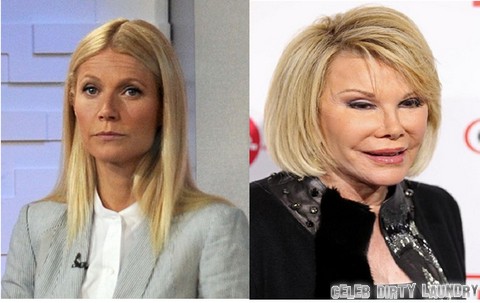 I have never exactly been a fan of Joan Rivers BUT if you force me to choose between her and that pompous, condescending BITCH named Gwyneth Paltrow, well then I’m tossing all of my support behind Joan. First of all, very few people like Gwyneth, including those that live with her so she’s foolish to cast stones at anyone at all in Hollywood! Then there’s the whole out of touch with reality thing. She claims to be a cool and hip modern mama but then suggests wardrobe pieces for the everyday busy mom that collectively cost half a million bucks! Not only does she forget that she lives a life of privilege, but worse, she forgets that everyone else does not. Gwyneth is currently pimping a new cook book and is also covering the latest issue of Harper’s Bazaar, she admitted to trying Botox, but then had to take a shot at another celeb to take the heat off herself. Gwyneth’s comment of the week went something like this,

“I’ve probably tried everything. I would be scared to go under the knife, but you know, talk to me when I’m 50. I’ll try anything. Except I won’t do Botox again, because I looked crazy. I looked like Joan Rivers!”

Oh boy. A shot at Joan who we already know has virtually no filter, ever. Apparently People Magazine clued Joan into the insult and she at first explained why she has freely talked about undergoing the knife and indulging in other cosmetic procedures.

“I’ve always been open about what I do, because I want [women] to be able to get Botox and not look like a Sharpei. [Lying about having work done] is such a put down to women. It says to the average woman: ‘I’m beautifully naturally and you’re not.'”

As for Gwynnie’s swipe’s at the legendary Joan, they certainly weren’t about to go unanswered. Joan suggested that the perpetually-starved looking ice queen eat a sandwich, or three. She also said that if Gwyneth lived in NYC she would love to tell her to go to hell, in person!

Will Gywneth ever stop putting her foot in her mouth? Seriously, will this chick ever get it? Tell us your thoughts in the comments below!