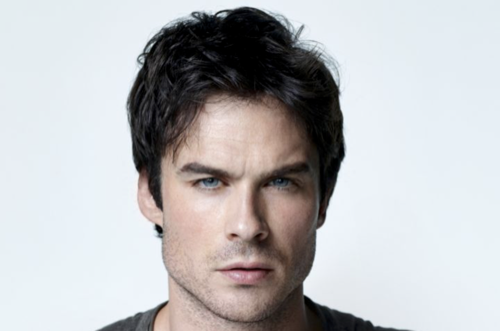 Oh dear, this is going to send Vampire Diaries fans into a frenzy. Ian Somerhalder has been busy with endorsements and photo shoots, and his latest photoshoot is all kinds of fun.

Without a doubt, Ian has a game plan here. After four seasons on the Vampire Diaries, he finally landed his first major film role earlier this year – coincidentally, right after he broke up with Vampire Diaries co-star Nina Dobrev. Since then, he’s hardly been staying undercover, instead of showing up at events, going to conventions, and participating in hot, hot, hot photoshoots.

One could say that the photoshoot was a message of sorts to his ex-girlfriend, who he misses so dearly… not. We still don’t know why Nina and Ian broke up, but rumors are all pointing to him cheating on her. I don’t know how much of that is true, but their breakup didn’t seem to have been as amicable as they claim it was. In that scenario, could he have been trying to show Nina what she’s missing? I’d like to think that he’s more mature than that, but with Hollywood, you never really know.

He could also be trying to change up his image a little bit. We all know he wants to land Christian Grey in Fifty Shades of Grey, but maybe he’s trying to up his sex appeal to land the image of a leading man in Hollywood – one who could do any type of movie, from romantic comedies to action. Right now, he’s still a TV star – even though Nina’s well on her way to becoming a movie star. She has plenty of time to establish her career outside of the Vampire Diaries. He, on the other hand, does not. So could the photoshoot just be another tool for him to further his image?