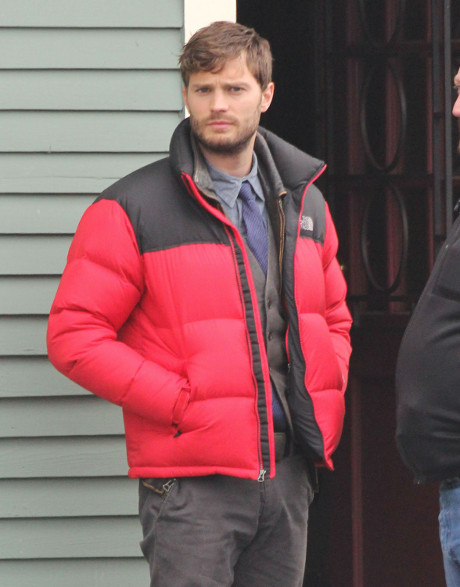 There are countless rumors as to why Charlie Hunnam flaked on the role of Christian Grey, but let’s be honest . . . at this point, it sort of looks like he dodged a major bullet! E! News is now reporting newcomer Jamie Dornan as the producers’ top contender. Haven’t we heard this before? It feels like the studio is just stirring up as much drama about the movie as they can to keep it relevant and exciting!

Die-hard fans are still holding out for Ian Somerhalder, Matt Bomer, or Robert Pattinson to fill the role of their fantasy man. Chances are high, however, that none of the favorites will be cast! Don’t you think if author E.L. James could have snagged RPatz for the role, she would have? She did write the character with him in mind! (Remember the whole Twilight fanfiction thing?) This brings up the awful truth that Anastasia Steele was dreamed up with Kristen Stewart as a character model. It makes Dakota Johnson playing the naïve virgin more palatable, but not much.

E! News’s source is now claiming that chemistry between Christian and Ana isn’t the driving force in finding a new leading man. “The studio isn’t worried about Dakota,” the source added. “They think she could handle whoever the guy is.” So what is the studio looking for when trying to locate the perfect Christian? My guess would be a warm body willing to take the role at the lowest price possible.

We could sit here all day and talk about who our dream celebs would be for the roles, but at this point, it’s no fun anymore! Instead, let’s talk about who would be the absolute worst cast for the roles! For me, Kristen Stewart as Ana would be a movie deal breaker. If her blank expression and angry-at-the-world attitude isn’t a good enough explanation as to why she would be the worst cast in the role, then how about the fact that she simply can’t act?!

And my worst Christian pick? It’s a tie between Taylor Lautner and Shia LaBeouf. Taylor is cute, but a sexy actor he is not, and Shia makes me feel completely uncomfortable every time he’s on screen! It might have something, or everything, to do with that Sigur Ross music video he did naked, but that’s an ugly can of worms that no one wants to open again!

Who would be your absolute worst cast for the roles of Christian and Ana? Take our poll below and let us know who YOU think should don the Christian Grey sex suit. [If you took our poll at an earlier date, you’ll  notice a few new additions, so if you feel these new choices would be a good fit then give them your vote!]