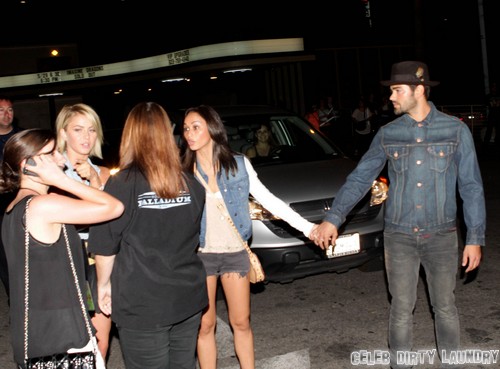 Julianne Hough may appear to be all smiles since splitting from Ryan Seacrest after nearly three years together, but those close to her say that she’s anything but happy. When the couple first split up there were rumors that her hard partying was one of the reasons behind Ryan deciding to pull the plug. He is fourteen years older and far more set in his ways. At 24, Jules still is looking to have fun and has the resources to do so.

According to the June 10th print edition of National Enquirer, after the break up Jules went on a huge bender and she has yet to bounce back from the edge. According to sources she’s not drinking more than ever and her family is extremely worried about her. Older brother and DWTS pro, Derek Hough is ready to have a full family intervention. He and Jules’ father both believe that if they don’t do something soon she’s going to end up in a world of trouble that will ultimately ruin her great career.

Let’s be real here, every photo that we’ve seen of Jules in the last two months is of her out and partying. Remember when we used to see photos of her out shopping or grabbing coffee? It does look like, at least for now those days are a thing of the past. Should Derek intervene? He believes that rehab is absolutely necessary and from the looks of things I’m thinking it may be true.

Can Jules end this bender on her own? Or do you think it’s more than a bender and now a clear cut indication of a real serious addiction taking shape? Has she always had a bit of a problem or do you think splitting with Ryan is the catalyst? Tell us your thoughts in the comments below!