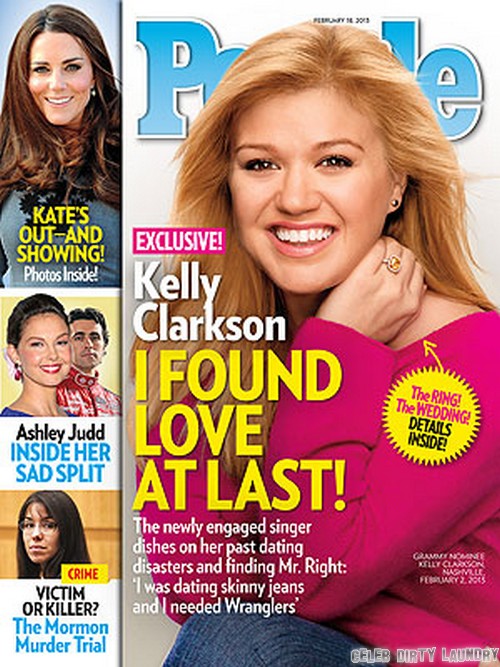 American Idol season one winner Kelly Clarkson is featured on the cover of the latest issue of People magazine and inside, she talks about finding love with her fiance Brandon Blackstock.

As far as never being in love before, she says that she finally figured it all out. She revealed to the new issue, “I was dating skinny jeans and I needed Wranglers.”

She says that she knew it was something special when she began to fall head over heels for Brandon a year ago. She recalled, “Out of nowhere I just said, ‘Thanks for being an awesome guy.’ I’ve never been loved properly by a man, and I was just like, ‘I thank you so much for that.'”

At that time, she had no idea that Brandon was going to propose to her. She said, “Not a damn clue! If I did I would have worn something besides Uggs and a sweatshirt with no bra.”

She says that they are busy working on an “earthy” outdoor wedding for the fall and in the meantime, she is also working on two albums and preparing for the Grammy Awards this month. She said, “I didn’t know life could be this happy.”

This issue of People hits shelves on Friday. Will you be picking up the latest copy of the magazine? We certainly will, most definitely for all of the details on her wedding dress and engagement ring!